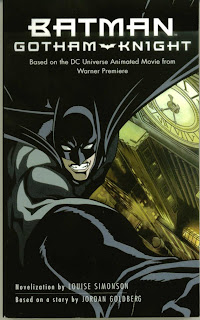 A solid round of applause to Warner Brothers Animation for producing a truly marvelous new animated film in the continuing saga of ’s greatest detective. WB recruited several popular Batman comics scribes to contribute a story set during the interval time frame between BATMAN BEGINS and the soon to be released, DARK KNIGHT. The idea was to create a direct to DVD animated feature they could release while the sequel was playing in theaters around the world. What is truly exciting is that producer Bruce Timm opted to have each segment done overseas in employing their brand of stylized cartooning known as anime. As a fan of animation, I’m most eager to see this movie when it debuts.

In the meanwhile, not one to miss a product opportunity, those same WB execs took the animation film script and had it novelized for the paperback market. They were also smart enough to assign it to Louise Simonson. Simonson, no stranger to comic scripting, took the separate elements from the movie and wove them together into a very neat, cohesive drama that effectively captures the somber tone of this Batman’s world.

It has only been a few weeks since the events depicted in BATMAN BEGINS and Jim Gordon and his team of detectives find themselves hard pressed to maintain law and order in the hell-hole that is . With the death of mob boss, Falcone, both the Italian and Russian gangs are battling each other to gain control of the city’s criminal underwold. Amidst carnage, the Scarecrow is still at large, directing an army of Arkham Asylum escapees, one of which is the mutant monster known as Killer Croc.

And if that wasn’t enough to keep billionaire Bruce Wayne’s alter-ego busy, a deadly super assassin, known as Deadshot, is responsible for several high profile murders. Word on the street is that his next target will be the Caped Crusader himself.

Novelizations are tricky as the writer generally has to pad the narrative to comply with normal book lengths that usually exceed film scripts. Still, the book should mirror the events of the movie it is based upon. Simonson not only attains that objective but also enhances the adventure with her own personal understanding of this truly iconic cultural hero. BATMAN GOTHAM KNIGHT is a good read and will appease even the most dedicated Bat-fans.

Thanks, Joe. Much appreciate your stopping by to read these reviews.
I always have fun writing them and hope people have as much enjoyment in reading them.