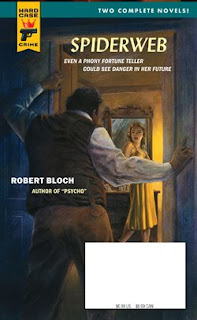 Side B
SPIDERWEB
By Robert Bloch
Hard Case Crime
160 pages

(As promised, this week I’m reviewing the “other” side of the new Hard Case Crime double flip book. For my comments on Side A, see my preview entry below.)

Eddie Haines is a small time dreamer from who comes to in hopes of hitting the big time with his good looks and radio trained voice. He wants to be TV announcer. When the harsh reality of comes crashing down on him, he is left battered, penniless and completely disillusioned. Refusing to return home a failure, Haines opts to take a more final solution to his problems.

Just as he is about to commit suicide, someone slips a hundred dollar bill under his door. The owner of that C note is a small, fat and bald little German fellow calling himself the Professor. At first Haines thinks the odd fellow his lucky angel because the Professor has come to recruit him with the promise of immense fame, glory and riches. It is temptation the dejected young man cannot possible resist.

He soon learns that his mentor is a sophisticated confidence man with an amazing intellect; all of which is put to use robbing the wealthy. A polished manipulator with a silver tongue, the Professor convinces Haines that their activities are no more immoral than toothpaste commercials on television. If the rich are so gullible as to part with their money on any brightly packaged gimmick, then why shouldn’t they partake in the harvest?

The Professor sets about creating a fictional persona for Haines, turning into a psychological guru named Judson Roberts. The idea is for Haines/Roberts, to become an indispensable crutch to the varied neurotics thus being allowed into their personal lives to learn their most intimate secrets. Secrets which the Professor then uses to blackmail them. By the time Haines realized just how evil his teacher is, he is eyeball deep in extortion and murder. He has become nothing but another sucker caught in his mater’s bloody web. Can he escape, or is he doomed to a life of crime?

SPIDERWEB is an intense, taut thriller that completely engrossed me from the first page. It is clearly one of Block’s finest works and a real joy to read. Combined with SHOOTING STAR, this double-book package is a real treasure for any fan of crime fiction.

Another really good book by Bloch. I usually like the mystery/PI bboks better, but this is a really good expose of the self help racket, a racket that still goes on today.