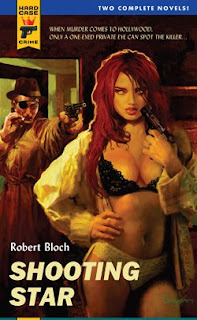 As a teenager in the early 1960s, one of my fondest memories is of the Ace Doubles. I don’t pretend to know the exact history of these paperback flip books, only that I bought many of them in all kinds of genres. Why the idea came up, again, I haven’t a clue. Maybe it was a marketing ploy to give the readers twice as much bang for their bucks. What they did was print two books together, usually by different authors, back to back in reverse with two separate covers. Thus if you held one side of the book, the second half would be upside down. Once you finished reading one novel, you merely “flipped” the book over to read the second.

Hard Case Crime has brought back this nifty little gimmick with two crime thrillers from the pen of Robert Bloch, the author famous for having written the film PSYCHO for Alfred Hitchcock. Each of the two books has its own cover and is printed back to back. My initial thought was to read both before doing my reviews, but I realized that wasn’t fair. Each novel should stand on its own despite the other it is paired with in this package. To that end, here’s my first review of what I’m calling side A. Next week some time, after I’ve finished it, come back to see my review for Side B.

In SHOOTING STAR, Block makes good use of his intimate knowledge of and its eccentric citizenry by setting it as the backdrop to a story of murder and drugs. Mark Clayburn is a one-eyed literary agent who has fallen on hard times. All of which is explained as the narrative moves along. Clayburn, for his own personal reasons, also possesses a private investigator’s license and that is what snares him into an affair he really had no business getting involved with.

A famous western star named Dick Ryan was shot to death in his trailer out on the ranch set of his latest movie. In the process of investigating the case, the police find marijuana and suddenly Ryan’s name is sullied by this association with drugs. Which is where one-time producer Harry Bannock comes into story. Bannock tells Clayburn that he has bought the rights to all of Ryan’s old western melodramas and stands to make a fortune if he can package them for television distribution. The trouble is because of the drug connection, none of the major TV houses want to associate themselves with the late actor. Thus Bannock hires Clayburn not so much to find out who killed the star, but rather to prove his was not a drug addict and clean up his reputation.

Of course the second the eye-patch wearing Clayburn begins poking his nose on the month old case, he starts getting anonymous phone threats to drop the case. Then a beautiful young starlet is murdered shortly after telling Clayburn she has information for him. Soon the bodies are piling up, the cops are becoming very, very annoyed with the agent turned private eye and a twisted killer is still free and most likely ready to make him the next corpse.

Robert Bloch was an accomplished writer and his style is always entertaining. He plays loose with the entire noire genre, having fun with his hero at the same time delivering a really good mystery that kept me guessing until the final pages. SHOOTING STAR delivers on all fronts. Here’s hoping Side B is just as good.

I really enjoyed this novel. Even though it's a straight hardboiled novel, you can still see the influence of Lovecraft.

I have literally dozens of double westerns from Ace. I love'em.

Hi Glen. Wait till you read the flip side of this package. SPIDERWEB is
another of Block's gems. The guy
was really a terrific writer.