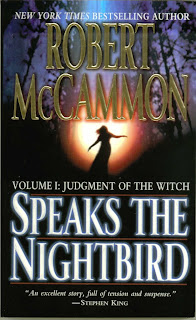 Will someone please tell me how you review half a book? That’s the dilemma I find myself in after having just finished SPEAKS THE NIGHTBIRD : Vol. #1 by Robert McMammon. Had I been aware it was only the first half of a longer story, I would have waited until I had both before reading it. This doesn’t excuse the publisher in the slightest. Part of me is very upset with all this and righteously so.

I would love to meet the editor who came up with the idiot idea of splitting this novel into two books. This is just another case of avarice and greed winning out over common sense. If this book is actually one half of McMammon’s actual manuscript, then we can deduce the entire narrative is approximately 966 pages long. I have dozens of books in my library (paperbacks no less) that are longer this. I had no qualms in purchasing them, nor any difficulties in reading and enjoying them. There is much to be said for a big book.

Little can be said for stupid editor/publishers who make us pay twice for one story. Shame on Pocket Books and all involved. It was a cheap, economic trick and one we find reprehensible. Especially when done to such a wonderful work of fiction.

The book is an historical murder mystery that takes place in the American Colonies of the in 1699. McMammon describes an accurate, frontier world where survival was a daily struggle and the colonists were very much British in their sensibilities about law, justice and government. In the new settlement of Fount Royal two men have been murdered and their deaths appear to be the work of a witch. After locking her up, the Mayor, a pompous character with dreams of riches for his burgeoning village, sends a message to Charles Town asking for a Magistrate. He wants someone who will come and conduct a speedy, but proper trial so they can legally burn the accused woman and end her threat.

What he gets instead is Issac Woodard, a seasoned, intelligent judge who will not allow himself to be used as a tool for civil murder. Accompanying him is his astute and clever young clerk, Matthew Corbett. Matthew is the book’s protagonist and we quickly learn his childhood as an orphan on the wild streets of was anything but pleasant. Rescued from a boy’s home by Woodard, Matthew matures into a quick thinking apprentice who loves to solve mysteries. The case of the Fount Royal witch soon has him playing detective, searching for clues and at the same time attracting the animosity of the town’s people. They want Rachel Howarth, the beautiful accused widow, put to death and are frustrated by Woodard and Corbett’s turtle like investigation.

By the end of this book, Woodard has fallen seriously ill adding to Matthew’s worries. The evidence they accumulate is all damning and it appears the Magistrate will have no recourse but to condemn the woman in his ruling. Believing her innocent, Matthew is all too aware his time to find the real killer is running out unless he can solve the various mysterious happenings in this swamp-infested world he and his mentor have come to.

SPEAKS THE NIGHTBIRD is a terrific first half. Still it only that and being fair, I cannot recommend it to anyone, by itself. I’m left with having to find the second half and it’s a predicament I do not appreciate at all. So, unless you’ve both parts in hand, save yourself this grief and pass on this book.

Ron, I read this in hardcover, and it is fantastic, as is the recently released sequel QUEEN OF BEDLAM. Both are highly recommended.

I agree, Mark. I just wished I'd have found the hardback so I could
finish it. Ha. And as he is one of my favorite writers, I'll certainly be picking up QUEEN OF BEDLAM.
Thanks for stopping by.

Robert McCammon has been one of my favorite writers for years. His SWAN SONG is a fantastic read as is A BOY'S LIFE and STINGER, which is like the best 70's sci-fi horror film you can imagine.

Like you, D.L., McCammon is one also one of my favorites. BOYS LIFE is one of the top 5 novels I've ever read and I loved SWAN SONG. Sorry to
say, I've yet to read STINGER, but
am going to have to make an effort and find a copy. Oh, and yesterday
I stopped at a local bookstore and ordered the second half of this book.
Can't wait to get it in so I can finish her.
Thanks for writing.