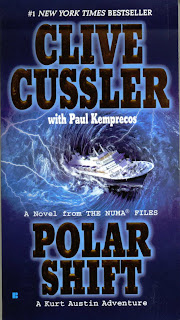 During the Golden Age of the pulps, the most popular adventure title on the newsstands was DOC SAVAGE as written by Kenneth Robeson. Robeson was a Street & Smith housename and the majority of the Man of Bronze’s exploits were written by Lester Dent. Unlike the mysterious, pistol-packing avengers the Shadow and the Spider, Doc was a full blown public figure who traveled the world with a loyal group of compatriots.

It is no wonder that the minute Clive Cussler introduced the world to his seafaring hero, Dirk Pitt, pulp fans were only too ready to welcome him. The similarities between Doc and Dirk are many and Cussler has rightly inherited the mantle left by Dent in creating over-the-top, globe spanning adventures. Sadly, Cussler chose to age Pitt as if he were a real person and as he grew older, so did his creation. Eventually this resulted in having a hero too old to go adventuring.

Cussler solved this problem in two ways. The first, and most bizarre, was when he whipped up a fully grown Dirk Pitt Junior on his readers. He and his writing buddies have done two books with this father and son team and although they are fun to read, it still seems an awkward fit. Whereas Cussler’s second ploy, one I’ve always assumed was foisted on him by his publisher to fatten the cash cow, was to invent a spin-off series featuring another NUMA agent, Kirk Austin. Although not physically identical to Pitt, is very much cut from the same chivalrous mold and is a handsome, daring, modern day Galahad. This particular series has produced some terrific books and POLAR SHIFT is no exception.

The story starts in during World War II with a Hungarian scientist named Kovacs fleeing both the Nazis and Soviets. Protecting him is a mysterious German agent who works for a secret organization aware of the professor’s importance to the future. Kovacs has developed a process by which ultrasonic waves can be made to disrupt the Earth’s magnetic poles. Were such knowledge to fall into the wrong hands, the power wielded could destroy the world. The agent, Schroeder, manages to save Kovacs and get him safely to where he changes his name and disappears into academic obscurity. Thus ends the action packed prologue.

Jump ahead to the present and a group of well financed anarchist have uncovered papers left by Novacs detailing his theories. They set about creating giant dynamos and begin to experiment on the open seas. One such trial results in the sinking of massive ocean cargo ship by rogue waves well over a hundred feet high. Thus NUMA is alerted and enter Dirk Pitt and his team of scientist/adventurers. By the time Dirk learns the mystery behind the freakish polar shifts, he will have traveled to the Artic and uncovered a lost city within a dead volcano, discovered a herd of dwarf wooly mammoths and been chased through the highways of . in an old Stanley Steamer pursued by a gang of machine gun wielding thugs wearing Civil War uniforms. All in a day’s work for the intrepid Kurt Austin. Oh, and there is of course a beautiful lady in distress to be rescued. This time is she is the late Dr. Kovacs’ granddaughter, who holds the mathematical key to stopping the polar shift.

No one writes better pulp fiction than Clive Cussler and Paul Kemprecos. POLAR SHIFT is another feather in their caps. Like popcorn at a Saturday afternoon matinee, it’s almost too good to describe.

My good friend, Andrew Salmon, read this review the other day. Having never read a Cussler book, he became curious and found a copy of the very first Dirk Pitt novel, PACIFIC VORTEX and writes to say he is loving it.
Thanks, Andrew, for validating what I try to do here, in reviewing both stand alone books and series. I'm sure there are folks who have wondered why I bother doing the series book and you just that answered that marvelously. Because no matter how popular a writer or series, there is always someone out there yet to have discovered them.
Which is the why of this column.
Thanks one and all.