DILLON AND THE VOICE OF ODIN 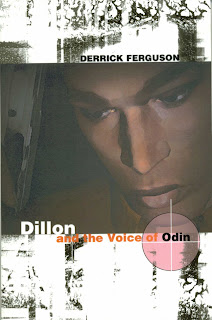 Every now and then a writer delivers a book that is just so pure pulp, you want to clap your hands and shout hallelujah. Derrick Ferguson as a writer is cut from the same cloth as Walter Gibson, Lester Dent, Ian Fleming and Clive Cussler. He’s a pulp wordsmith who spins a rollicking adventure yarn that never lets up from the first page to the last. It is clear to see in his black hero, Dillon, that knows this genre inside out. He not only relishes it, he finds way to enhance it by upping the ante constantly.

Dillon encounters one familiar cliff-hanger threat after another in his battles against Odin, the criminal mastermind. But it is how he manages to escape each and every one of these death-traps that is fun, ingenious and totally captivating. I haven’t had this much fun reading a book in a long time.

Who is Dillon? Where does he come from and how did he become such a skilled, daring, near super human hero of justice? Well, would you believe he was raised in a hidden martial arts temple hidden in the mountains of ? Of course you would, if you are a true believer. Or that he possesses such arcane skills as the ability to lower his body metabolism to appear dead, only to be comfortable resting in a deep, meditative trance.

also provides a terrific supporting cast of absolutely larger-than life, eccentric characters both good and evil such as the old Eli Creed, Dillon’s one-time mentor and Chew Mi (pronounced me), a sexy oriental femme fatale whose single goal is to give him a glorious death. Add exotic locales from small English hamlets to the jungles of and you have a rollicking adventure romp that is highly cinematic in its orchestration.

Sadly this book was handled by a very small publisher and received very little notice or distribution when it was released in 2003. It is my fervent hope that this review will help correct that wrong and help bring it to the wider audience is so richly warrants. If you love action adventure novels with verve and imagination, you will not do better than
DILLON AND THE VOICE OF ODIN.

It's still available from Amazon.com

Hi Derrick,
Thanks. I was just going to tell Glen about the book being still available. And I was also going to pass along the great news that you've a sequels in the pipeline that should be out soon. That's the best news of all.

Derrick's an amazing writer. Great review, I hope it brings this book to more people's attention.

No debate there, PC, Derrick is one of the finest new action thriller writers out there. I too want to see him get the recognition he richly deserves. Thanks for stopping by.