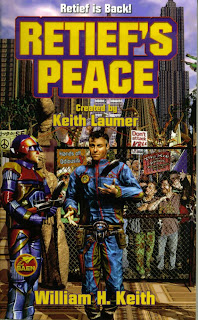 When I was a high school student back in the early 1960s, I discovered science fiction through the pages of a marvelous monthly magazine called Worlds of If. It was edited by writer Frederic Pohl and often carried series fiction featuring reoccurring heroes. One of my favorite such series were the Retief short stories written by Keith Laumer. Jame Retied is an undersecretary in the Diplomatic Corp set against the backdrop of a galactic universe where man has encountered hundreds of alien races.

According to his bio, Laumer had himself done service in various British Embassies around the world and used his own personal experiences to enliven Retief’s adventures. For the most part, his tales pitted him no so much against physical threats and the
inane stupidity of corrupt government, including his own superiors. Laumer used his tales to satirize the illogic of most world politics as he saw it and for that reason they were particularly fun. Predating both Star Trek and Dr. Who, the Retief stories were a wonderful blend of space opera hijinks and pun-filled comedy. Laumer had a way of mangling the language as an added barb to his jousting literary lance.

Imagine my elated joy when I discovered this new book starring the irascible and ever loving Jame Retief on a bookstore shelf. Apparently someone has licensed the rights to the character and now he’s off on a brand new set of exploits. I’m very happy to report that William H. Keith, like Laumer, is no slouch in the satire department and he cleverly weaves a story fanciful story of intergalactic intrigue and deception that is a laugh fest from start to end.

Retief, as always, finds himself in the middle of an age old conflict between two races, a criminal operation organized by his old enemies, the Groaci (think Ferengis from Star Trek) and a group of space hippies involved with a planet wide peace demonstration. Of course Retief’s is the only sound intellect in the entire bunch and it falls to him to uncover the Machiavellian doings before three planets erupt in catastrophic warfare. Is he up to the task? Or better yet, was there ever a doubt our daring, ingenious hero would come through in the end? Nope.

RETIEF’S PEACE was a most delightful reacquainting for this writer. It’s also a very good place for those of you who have never encountered Jame Retied before. In a field too often filled with overly dramatic, weighty themes, he is a breath of true fresh air. Do yourselves a big favor and pick this one up.

Ron -- I think that Laumer was an US Air Force attache at an embassy or consulate in Southeast Asia in the late 50s or early 60s. That formed the basis of his very interesting mainstream novel, Embassy.

I love the original Retief stories -- interesting that, like his Bolos, someone is doing zombie novels of this character.

Hmm, you could be 100% right here,
Stu. Again, I read those Laumer tales as a teenager and my memory of
his bio data could be extremely faulty. Ha. But not my recollection at how much fun those stories were.