THE APOCALYSE PARABLE: A CONSPIRACY OF WEEDS 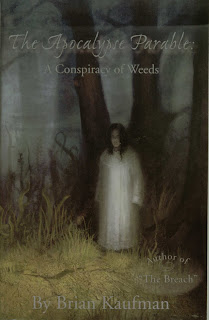 One of the joys of doing this column is discovering books published by small outfits that rarely get wide distribution. Such is the case with this novel by resident, Brian Kaufman. It is also one of those books difficult to slap a genre label on. It is part mystery, part thriller with a good dose of philosophical debate thrown in for good measure.

When widower Daniel Bain is hired by reclusive millionaire, Mordecai Ryan, to find Jesus, he at first thinks the dying old man is orchestrating some sick-twisted hoax at his expense. Bain is a skip-tracer who locates missing people, primarily through the use of computers and the internet. He’s as far from being a private investigator as a counter clerk is being the head of a bank. Still, the obscene amount of money Ryan dangles under his nose is too much to resist and he reluctantly takes the job.

From that point on Bain’s life is systematically turned upside as he experiences one bizarre event after another like a cosmic chain of good and bad luck interwoven together to confuse the hell out of him. Years earlier Bain’s wife had run off to be with another man. She took their baby daughter with her and then both of them died when their car hit a patch of winter ice and flipped off the road. Bain’s grief became so mixed up with his anger at her betrayal, he’s become an emotional zombie and cynic.

Now his search for Mordecai Ryan’s Jesus leads him to a nineteen year girl who sells pornographic tapes and pictures of herself over the internet. Like Bain, she too is a wounded soul and they instantly find a kinship together. Neither is aware of just how strong that bond is until a stalker threatens the girl’s life and Bain finds himself cast in the role of her protector. All the while he finds himself getting closer and closer to find Ryan’s lost Messiah.

Kaufman writes with courage in tackling spiritual themes. He clearly recognizes the human condition for its broken state, but through Bain he refuses to accept the tired old platitudes that come from a thousand year old gospel. The book’s gruesome climax hints at a begrudging acceptance of the greatest mystery of them all, love. This is a well written book with weighty themes. If you aren’t afraid to think about the big questions, then this is a book you should seek out and read. Whether in the end, you agree or disagree with Daniel Bain, you won’t easily forget him.