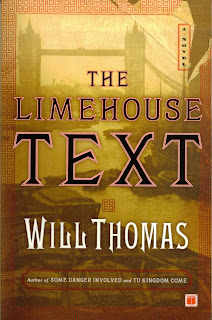 THE LIMEHOUSE TEXT
by Will Thomas
A Touchstone Book
337 pages

Limehouse is the name the Brits gave to the section of old Victorian London. Thus it is the primary locale for most of the action in this, the third case of Inquiry Agent, Cyrus Barker. In the first book of this series, SOME DANGER INVOLVED, Welsh clerk, Thomas Llewelyn came to work for Barker after answering a classified ad. He was summarily informed that Barker’s former assistant, Mr. Quong, had been murdered, shot between the eyes and his body dumped in the river. Barker, a former sea captain with a brilliant intellect like his contemporary, Sherlock Holmes, is unable to solve the crime nor find Quong’s murderer.

Now it is two years later and Barker is informed by a local constable that, before his death, Quong had something left at a pawn shop. No sooner do Barker and Llewelyn retrieve the item in question, a small Chinese text book on martial arts, then the officer is gunned down in front of them; a bullet between the eyes. Barker identifies the text as having been stolen from an ancient Chinese monastery because of the deadly killing techniques it teaches.

Once again Thomas sends his pair of heroes on a quest throughout as yet another fascinating part of Victorian England as he did in his two previous outings. The world of the Chinese population in is well defined with all its ramifications for the future of the British Colonial Empire. Thomas also reveals many of Barker’s mysterious history which he only alluded to in those earlier adventures. Within only a few chapters the plot is well set. A deadly assassin from has traveled half-way around the world to find the unique little book and will kill anyone who gets in his way. The suspects begin to add up with a casts of colorful characters both foreign and domestic, to include a pompous secretary of the Foreign Office who’s hobby is illegal bare-knuckles fighting.

I also appreciated how the relationship between the shy and inexperienced Llewelyn and the stoic, supremely egoistical Barker continues to evolve, each learning to respect and trust the other with each new case. By the end of THE LIMEHOUSE TEXT, the young Welshman learns to value his own intuition and value to the remarkable man he has come to work for. THE LIMEHOUSE TEXT is another fine entry in a really fun series and I for looking forward to number four.

I've never even heard of this series. Looks like I'll have to give it a look.

I love Sherlockian mysteries (Stretching that to include Nero Wolfe and his imitators as well). I think the best rival of Holmes is The Thinking Machine, whose author died on the Titanic

Glen,all three books thus far are available from Amazon at a reasonable price. They are SOME DANGER INVOLVED - KINGDOM COME - and this latest one.
Sincerely if you, like me, say you enjoy Sherlockian mysteries, you will certainly appreciate this series.

Thanks for the list. My list of books to get and read keeps leaping ahead of my available time and money. Your output alone makes the list list longer and longer every time I turn around.

This is a pretty good series, grittier than the original Sherlock Holmes or Martin Hewitt Victorian-period stories. The first book, SOME DANGER INVOLVED, is still my favorite.

I would be hard pressed to pick a favorite. Like you, Stu, I often find myself remembering the fun of discovering a new series and meeting the characters for the very first time is always special. Still, the subsequent second and third books have been winners in my opinion and I'm very anxious to read a fourth.
Hoping this last for a long-long time.