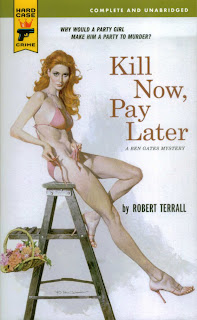 Back in the early late 1950s, my Uncle Ray use to go through books like this one as if he were eating salted peanuts. Many was the night, after dinner, that I’d race across the back yard to his house to hook up with my cousin, David, to see if he was up to a game of baseball or football in the neighborhood field depending on what season it was. I’d find Aunt Winnie in the kitchen cleaning up the dishes, while in the living room there would be Uncle Ray, a Navy Yard welder, stretched out on his favorite sofa, in his stocking feet, the black and white television on and a cheap, Gold Medal mystery novel in his hands. Ray could both read through one of those gaudy covered thrillers in one evening, at the same time be tuned in to the evening broadcasts. The guy simply amazed me.

And so did those wonderful paperbacks. Of the army of tough-guy private eyes to grace the pages of those drugstore rack thrillers, Robert Terrall’s Ben Gates was one of the finest. Gates, like many of his counterparts, was a based gumshoe with fast fists for the bad guys and charm aplenty for the sexy ladies, of which there were many. KILL NOW, PAY LATER is typical of his cases, wherein he’s hired by an insurance company to protect the wedding gifts of a wealthy socialite. A simple enough case until somebody spikes the coffee he’s drinking and by the time he comes to, someone has been scared to death during an abortive robbery and the perpetrator gunned down.

It all seems like a very open and shut case. Unfortunately it also makes Gates look like an incompetent accomplice. Knowing the only way to clear his name, and reputation, is to unravel the caper on his own, very much to the ire of the State Tropper Captain in charge. Along the way, our witty, cigar-smoking shamus tangles with no less than four stunning, sexy beauties all with various motives. The only thing they have in common is getting him in bed. Even though Terrall was excellent at creating a light, satirical atmosphere to his mysteries, Gates is very much a real detective and by the end of the book his efforts expose a poignant, family tragedy.

All in all a dandy pulp mystery Uncle Ray would have enjoyed immensely. In fact, considering he read hundreds of these, he probably actually did. I hope you will too.

I just got and read this recently. I thought you skipped it somehow.

Ben Gates has a five book series. I've read one other novel, Blackmail, Inc. which was the first. It's pretty good too.

I really liked them both, and now I guess I have to find the other three in the series.

Hi Glen, thing is, HCC sends me not only their released titles (as you
and other subscribers get them) but
also advance review copies of books that are still months away. Obviously those get priority in my stack of to read & review, as HCC and other publishers hope to get quotes from such early reviews. Also, I do read lots of other books beside noir, so I try my best to mix them up here. A little something for everyone, including those folks who sci-fi, horror and other pulp related genres over the mysteries.