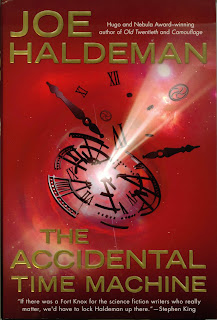 Ever since H.G.Wells set forth the idea of traveling through time, dozens of writers have found the challenge of playing with time irresistible. This includes followers of both hard science fiction like Isaac Asimov and Robert Heinlein and practitioners of the not-so hard sci-fi, poet scribes ala Ray Bradbury and Richard Matheson among these. Hugo Award winner Joe Haldeman’s work is clearly of the former camp.

Matt Fuller is a research assistant at MIT who discovers the calibrator machine he is working on has somehow become a time machine that leaps into the future every time he presses the ON button. At first, it is only gone for a few seconds, but Fuller begins to calculate that with each jump, the machine expands it reach by a factor of twelve. Keeping the discovery to himself, he then manages to connect the small calibrator time machine box to an automobile. This allows him to jump into the future with the next push of the button. So begins Matt Fuller’s adventure and ours.

Thankfully Haldeman then sets the spotlight on the socio-economic goings on of future rather then getting too involved with the technical requirements for a real time machine. He does cover the usual paradoxes inherent with messing with history, but it is his deft eye on the evolution of social mores that is the fun of this book. He imagines first a world where right wing Christian fundamentalist have taken control of a ravaged country and set about building a society the Amish would find stifling. When Matt jumps again, he finds himself on the west coast where interaction between people is limited strictly to the internet and is operated by a sentient computer who appears as an attractive woman, sort of an electronic between an all knowing mother-hen and a guardian angel.

The book is breezy, fun and yes, thought provoking. I think H.G. Wells would have enjoyed it as much as I did.

I'm glad you liked it, but to be honest it sounds like the same old same old with the author's prognostications.

Although aware of this writer's other books, I've never read any of them, ergo I can't comment on your thought.
I can only judge this one book, and as I reviewed, it is a light weight book, with some interesting socio-economic musings. A good read.

I think I should have been more clear.

It seems like the socio econimic predictions are ones that I've read about before in other stories by other authors. To be sure, the true test is how this particular author handles his plot, characters, etc. to make this a unique work, but I feel like I want more imaginative stuff in my scifi, which seems like the same stuff over and over instead of stretching the creativity envelope.

Not knocking this book or this author, I just feel jaded by the subject matter.

Joe Haldeman is a brilliant writer-- his "Forever War" alone attests to that. (He also wrote two wonderfully entertaining Star Trek novels, back when there were only two of them-- his!) So I have no doubt it's a good book and, based on this review, I will check it out.

Well, Forever War was a great book, no doubt. However, I made the mistake of reading his more recent Forever Peace, and was quite disillusioned with Haldeman as a result. It left me with such a bad taste in my mouth that I haven't picked up a book of his since. That's not really fair, I know, to condemn an author on one bad book. I have a ton of other books lined up to read, though, so I'm pretty picky.

Hmm, I know what you mean, Troy.
Certain writers are hit and miss for me as well, like Dean Koontz or
Stephen King. Some of their books have delighted me to no end while others were painful tasks to complete. This particular Haldeman is really fluff stuff and easy to read. As I said in my review, he seems okay with just being laid back and telling in interesting tale of what if. No prize winner for sure, but still a fun way to spend a few hours.