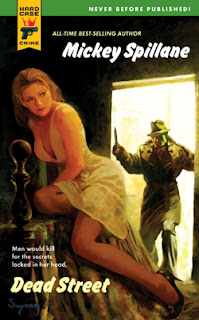 At the time of his death, last year, writer Mickey Spillane left four unfinished manuscripts. Two were Mike Hammer stories, one was an adventure yarn and the fourth was this hard-nose cop thriller. Spillane’s long time friend and protégé, Max Allan Collins assembled and produced the finished book with the use of the late writer’s notes. It is fitting that this truly terrific mystery should be published by Hard Case Crime, a publisher Spillane applauded for recapturing the excitement and fun of the old post-war paperback pulps.

Whenever reviewing such a posthumous effort, the temptation is to spend time praising the life and career of the deceased. I’m going to do my best to avoid that snare, as there are plenty of other, more capable reviewers to do that. But I will add my own personal observations relating to this specific title at the end.

After twenty years on the force, detective, Jack Stang, is retiring and his plans the future are vague. A visit from a stranger turns Stang’s life upside down with the news that the woman he loved and thought dead is still alive. Thus unfolds a bizarre story that Stang, although stunned by its revelations, knows instinctively is gospel. Tweny years earlier, his girlfriend, Bettie, had come across sensitive mob documents in her work for a computer company. For that, the mob attempted to kidnap her. During the ensuing high speed chase with the cops, the van Bettie was in plunged over a bridge into the . Although her body was never recovered, it was assumed to have been washed out to sea.

Now Stang learns Bettie is not only alive, but the accident induced both blindness and amnesia. Through the benevolence of the people who rescued her on a shore, Bettie was kept safe and out of harms way all these years. Now she has been settled in a retirement community for policemen and fire fighters in the sunny state of . Trouble is the mob has also learned she is among the living and still a threat to their operations. Stang rushes to complex and establishes himself as a friendly neighbor.

We sympathize instantly for at the emotional roller-coaster Stang endures in Bettie’s presence. He can’t come out and reveal their amorous past for fear of frightening her, yet he must find a way to rekindle her memories before it is too late. This is a taut, fast pace thriller with allegories aplenty. Spillane was aware that the book might be his last and he takes advantage of every scene to communicate with his legion of readers what a good and righteous battle is all about. It is a terrific farewell from one hell of a pulp writer.

In THE SHOOTIST, John Wayne’s last movie role was of an aged gunfighter dying of cancer. It was obvious to all that the Duke was playing himself and saying so long to all his fans. Reading through , I couldn’t help but think Mickey was doing the same thing with the character of Jack Stang. That he ended it with the ex-cop and his lady love reunited and happy was very much his final tip of the fedora to all of us. Rest in peace, tough guy.

actually Mickey left more than four unfinished manuscripts behind. At the time of his death, he had four novels going, one of which he pretty much finished (THE LAST STAND), DEAD STREET and two Mike Hammers. But years before, he had entrusted two other half-finished circa 1965 Mike Hammer novels to me; and other fragments, ranging from substantial chunks of manuscript to a chapter or two, were found in his papers. I will be finishing at least three of the Hammer novels for Otto Penzler at Harcourt, and if the public responds, there will be at least two more. First up will be THE GOLIATH BONE, the book he was concentrating on at the time of his death.

Hi Max,
thanks for setting the record straight. And for passing along the news about your finishing those Mike Hammer books. That's just great news and I'm sure mystery lovers are going to be thrilled by this. I sure am! Again, thanks for stopping by. I hope to be reviewing your own DEADLY BELOVED soon.

I can't wait for this to be available to the public.

For a long time I thought I had all of Spillane's works, but I'm very glad that I still need quite a few books.

You echo my own sentiments, Glen. Especially with Max being the person to complete these works. Thus guaranteeing they will be as pure Mike Hammer as Mickey would have wanted. Stay tuned.

I finally got this. Read it in one sitting.

I really enjoyed it. While it seems Mickey got a little "softer" after The Killing Man, this is still really good stuff. I wish the original idea discussed in the afterword had come to pass, but I'm really satisfied with this, and can't wait for the next books.

You and me both, Glen. Those new Mike Hammers due out are tops on my list to pick and read. Spillane was truly and American original.