THE BOOK OF THE DEAD 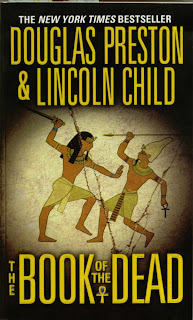 I make no bones about the fact that after reading THE CABINET OF CURIOSITIES, I became an immediate fan of this series. If there is a more traditional classic pulp hero than Special Agent Pendergast, I’ve yet to encounter him. Whereas Clive Cussler’s Dirk Pitt gets my vote for being a modern Doc Savage, Pendergast is the heir apparent to both the Shadow and Mandrake the Magician. What else can you say about a thin, gaunt F.B.I. agent who is rich, a genius and can time travel in his mind. That latter ability a trick he picked up in an ancient Tibetan monastery. See, I told you he was pulp eccentric. And of course he is the penultimate good guy.

Special Agent Pendergast first appeared in this team’s first work together, THE RELIC, but it wasn’t until THE CABINET OF CURIOSITIES that he took center stage and instantly captivated a readership hungry for this kind of literary action. That was followed up with the equally brilliant STILL LIFE WITH CROWS. Then came BRIMSTONE, and we Pendergast fans were shocked to discover the super agent did indeed have a deadly nemesis his equal in all things; his own younger brother, the twisted Diogenes Pendergast.

BRIMSTONE, much to our delight, was in fact the first book in a Diogenes trilogy that was quickly followed by THE DANCE OF DEATH. Here, for the second time in so many months, Pendergast, aided by his good friend, police Lieutenant Vincent D’Agosta, barely managed to foil Diogenes latest sinister plot. But Diogenes, in his own brilliant way, had outwitted our hero and in the book’s startling finale, successfully framed Pendergast for a series of murders he himself had committed. Thus the cliffhanger ending found our stalwart hero locked up in a maximum security federal prison while the psychotic Diogenes was still at large and planning his most evil crime yet. This last year, awaiting the release of THE BOOK OF THE DEAD, has been rough.

So, here it is, the final chapter. It is a winner from the opening page to the last, propelling the reader on a high speed roller coaster ride of wild, imaginative suspense and thrills. Diogenes, in a clever disguise, has made himself a staff member of the New York Museum of Natural History. It is here he plans a heinous mass murder the likes of which this city has never seen. Meanwhile, D’Agosta, along with the help of wheelchair bound computer wunderkind, Eli Glinn, orchestrates a fantastic, complex prison break that will free Pendergast; hopefully in time to thwart his insane brother. This chapter in the series also provided, for the first time, an intimate look back into Pendergast’s past, something and Child have skillfully withheld up until now. The revelations in this section are powerful and add much to the character’s layered, and unique personality.

Granted, most books should stand on their own, and in that regard THE BOOK OF THE DEAD will clearly confuse any new readers who have not read the previous two volumes. If, on the other hand, you make the effort to hunt them up and read them all, I guarantee you a truly exciting reading experience. There are just too few thrillers these days that are this much fun. Here’s hoping Special Agent Pendergast is around for a long, long time.