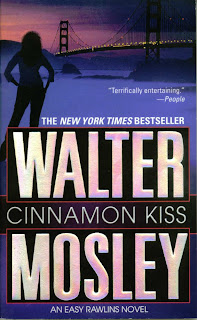 The joy of having favorite authors is whenever a new book comes out, you feel as if you are about to get together with old friends. That’s exactly how I feel every time a new Easy Rawlins novel arrives. Walter Mosley has created the best based private eye series since Raymond Chandler’s hardboiled Philip Marlowe stories. Whereas Easy is more southern fried. He’s a black man born and raised in and ends up in after World War II.

The series, of which this is the tenth book, begins in 1947 and works its way to the mid-60s. The previous entry, LITTLE SCARLET (reviewed here) dealt with the Watts Riots and their aftermath. CINNAMON KISS takes place a few months later when things have started to settle down on the streets.

Easy’s daughter, Flower, has become ill with a rare blood disease. Easy’s lover, Bonnie, a stewardess, informs him of a clinic in that can save Flower’s life. But the cost will be far beyond Easy’s current monetary situation. Easy is so desperate to save the child, he contemplates joining his psychotic friend, Alexander “Mouse” Raymond in robbing an armored truck. Luckily for our hero, before he can make that decision, he is offered a case by colleague. There is an eccentric, very famous private detective in who requiring the services of a black investigator.

Easy and Saul, the friend who recruited him, fly to the city by the bay and meet the short but flamboyant Robert E. Lee. Lee has been hired by very powerful man to find a lawyer named Axel and his African American secretary, Cinnamon. Axel has come into possession of highly sensitive documents that Mr. Lee’s client want returned to them without any publicity. Axel and the girl have disappeared. His trail has gone cold but Lee has learned that Philomena Cargil, Cinnamon’s real name, is from ; the black part of His needs of a black detective to take over the hunt.

Suspecting Lee to be a racist at heart, Easy is reluctant to take the job, but the money offered is enough to pay for Flower’s trip to the overseas hospital. He really has no choice. And once again Mosley sets us on a journey that is both entertaining and thought provoking. Before returning to his home turf, Easy spends a few days in Frisco and gets a quick schooling in the hippie movement and free love. To say it’s a cultural shock to his core beliefs would be an understatement. Rawlins is not a cynic, but he seen enough of life’s sour side to realizing the movement hasn’t a prayer of permanently altering American mores.

Mosley, like before him, is a social commentator and whether you agree with his politics or not, he presents them deftly with a writer’s subtle skills weaving them throughout the narrative. By the time Easy finds Cinnamon, he has uncovered a dead body and the reality that his simple case is a lot more complicated than presented to him. The missing papers are Nazis Bearer Bonds worth hundreds of thousands of dollars and the reputation of an elite family. These are dirty secrets that only cold blooded murder can bury. Easy’s job is to find the missing girl without stopping a bullet first.

CINNAMON KISS delivers much more than you expect from a good mystery. Much, much more. Give yourself a treat and pick it up.