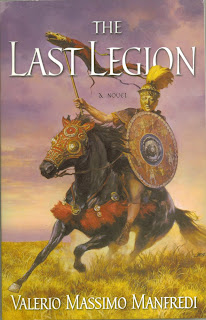 Some times you just get lucky. Which is what happened to me a few weeks ago when I received an e-mail promotion from Barnes & Noble on-line that they were having an inventory clearing sale. Several hundred titles were marked down to ridiculously low prices, in some cases with savings of 80% or more. If you love reading as I do, then there is no way you are going to pass this up. I bought five books from them, four of which were by writers I was unfamiliar with.

I chose THE LAST LEGION because of the cover and the book’s write-up. It clearly appeared to be a sword and sandal adventure and I do like these, if they are well done. The writer was an Italian historian and the text was translated into English. I decided to take a gamble and am so happy I did.

The is crumbling and the barbarian hordes have conquered most their once proud civilization. As the book opens, the barbarian Chief, Odoacer, sends his war captain, the vicious Wulfila, to murder the last regent of and kidnap his thirteen year old son, , the rightful emperor. Wulfila not only accomplishes this assignment, but his troops also massacre the last true Roman Legion that has been secretly assembled by ’ father to act as his personal soldiers. A handful of these brave men are spared and sold into slavery, whereas one of them actually escapes and attempts to warn the regent of Odoacer’s treachery. He is Captain Aurelias, a man with a haunted past.

When Aurelias realizes he is too late to save the emperor and his family, he makes a reckless attempt to rescue the young Ceasar and his teacher, a wise man named Ambrosinus, from Wulfila’s clutches. The attempt fails and he is severely wounded making his escape. He then comes in contact with a beautiful Roman refugee warrior woman named Livia. She hides Aurelias, nurses him back to health and together they hatch a daring plan to free the exiled from his prison on the . Aurelias seeks out those comrades from his legion, rescues them from the slavers and offers them the chance to redeem their honor by joining him and Livia on their foolhardy mission.

The Last Legion is extremely fast paced and wonderfully written. Manfredi knows his subject matter inside out and he brings an ancient world to vivid life. The story, once the young emperor is rescued, becomes a thrilling chase through a European landscape on the cusp of the Dark Ages. All of which ends in Brittania, where Manfredi’s real surprise is revealed in the final pages of the book. Ambrosinus is actually Merlin, the druid priest, and is the first ruler of this new island kingdom, taking the title of Son of the Dragon, or if you will, Pendragon. As the book closes, Ambrosinus tells us is a good king, he’s wed and has a son. The boy is named Arthur.

Two days after I received THE LAST LEGION in the mail, I was in a local movie house and spotted a poster on the wall with this title. I was stunned. Moving closer, I saw that it indeed was heralding a major epic based on this very book. I’ve always enjoyed King Arthur books and movie, so I was thrilled to have found this book even by accident. If the movie is half as good, it should be lots of fun. The book certainly is.

Sounds like a great read, that will hopefully make a great movie.

With the names Romulus and Wulfilia, I was really expecting some sort of detour into werewolf territory.

Having seen the trailers for THE LAST LEGION, it looks like they've upped
the Hollywood factor a great deal. For example, the emperor's tutor
is described as a wise old man in brown dress. Whereas they've got actor Ben Kingsley's looking like
Lord of the Ring's Gandalf, in pure white robes. Oh well, at least the action looks inspired by the scenes in the book, and if that's the case, it should be tons of fun.