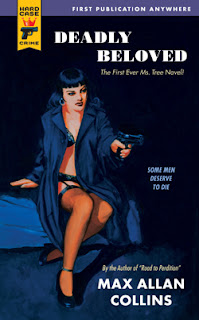 Back in the heyday of independent comics, writer Max Allan Collins and artist Terry Beaty created one of the most memorable characters to ever grace the pages of graphic literature; Private Eye Ms.Tree. The sexy brunette with the page boy cut and the square shouldered blue trenchcoat stuck around for fifteen years, moving from publisher to publisher as she delivered some of the best, slam-bang action mystery stories ever produced for any media. The barrel of her .45 was always hot as this dame had no qualms about giving the bad guys a lead send-off when the situated warranted. Which was quite often, much to our satisfaction. She was no Agatha Christie type puzzle-solver, although Michael Tree (her dad wanted a boy) was sharp as any tack on the board. She preferred to play in the tough-guys’ sandbox and the lady was every bit their equal in the wit and bravado departments.

At the time, we fans knew Collins was also an accomplished mystery writer and dreamed of the day when he would give us an honest-to-goodness Ms. Tree novel. That day has come, thanks in large part to publisher/editor Charles Ardai of Hard Case Crime. This is the book all of us clamored for and now that it’s here, it delivers on all cylinders.

The wife of a well known accountant catches her husband in bed with a hooker and blows them both to kingdom come. What should be an open and shut case is anything but to the homicide detective Lt. Valer. Everything about the crime is too set-up, too convenient. Through the woman’s lawyer, Ms. Tree is brought into the case. Valer believes the mob has recruited a murder specialist who covers up his hits by duping others into carry them. The idea of such a nefarious puppeteer seems outlandish, until Ms. Tree learns her client suffers from schizophrenia and that someone had switched her medication which kept her rational, with placebos.

And if that wasn’t enough to get the plot rolling, Valer then suggest the murder of her own husband, ex-cop Michael Tree, a year earlier on their wedding day, may have been another of the death planner’s contracts. Soon Tree and her associate, Dan Green, are knee deep in killers and assassins and the body count starts to climb. The hallmark of the Ms. Tree comics was their intensity and rapid fire pacing; DEADLY BELOVED is no exception. Collins also earns his mystery stripes as he plays fair and peppers his tale with more than enough clues for the astute reader to figure who done it. He also manages to provide a clever hat trick at the end that had me grinning like a kid exiting the carnival Fun House.

How many times can you tell the same story? In Collins’ case, there is no limit. The joy of DEADLY BELOVED is that it is very much the origin story of Michael Tree that all of us read and enjoyed so many years ago in the comics. And then again, it is told in an exciting new way that is completely accessible to the first time reader unaware of the character’s history. That is nothing short of brilliant.DEALY BELOVED is by far the best mystery I’ve read this year. Collins states, in his informative afterward, that future Ms. Tree novels with depend in large part to the reception of this first book. Max, please consider this a huge thumbs up and a heartfelt plea for more.

I can't say enough good things about HCC, MAC or Ms. Tree. I can't wait for this to be available to us average consumers.

Glen, I'm with you on all counts. Any mystery reader worth his or her salt will be hard pressed to find a better novel this year. I'm betting it
wins awards.

I tried to e-mail you, and it bounced.

Thanks for the books. I appreciate the thought.

FEMME NOIR should be out first quarter of 2008 from Ape Entertainment, followed by PERILS ON PLANET X in the summer and the new GRAVEDIGGER graphic novel in the fall, also from the same publisher. Somewhere in there will also be the KOLCHAK miniseries I wrote for Moonstone and a graphic novel adaptation of an upcoming horror movie from Lions Gate Films.

Thanks again, and good luck with HAZZARD.

Your most welcome, Chris. I don't know a more ardent Mickey Spillane or
Max Allan Collins fan than you. Enjoy the books and let me know what you thought of them when you've read them.

I'm looking forward to this book. The problem is I can never find any of his books at our local chains. I may have to order this one.

You got it, Anthony. No self-respecting comics fan should
be without this book. That goes for
self-respecting mystery fans as well.
Ha.
Sincerely, Anthony, I think you would love DEADLY BELOVED.

Thanks for the review, Ron. I loved the Ms. Tree comics series in its various incarnations. I have to get this, though like Anthony I'll have to order it. Hard Case has terrible distribution in my neck of the woods.

Hi Mark, thanks for stopping by and the comment. I've forwarded them to
Hard Case Crime publisher, Charles Ardai. It seems to be a really issue with them and one hopefully they can somehow correct in the future.

Finally got and read this. I really enjoyed it, but there were some problems with the update of the setting.

Hi Glen, glad you finally got a copy of this terrific book. You are right about some minor awkwardness with the adaptation from the original comic script version, but that's a minor
speed bump on what I think is really one of Collins' finest works to date.
Would so love to see this made into a film.