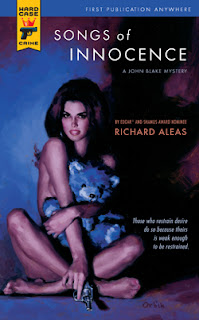 This is not an easy book to review. Not because of the technical aspects, Aleas is a professional and knows what he’s doing. Nor because of the actual talent he possesses as a storyteller. No, the reason why this novel is so difficult to grapple with is the subject matter itself; the underworld of sexual enterprise that exists in big cities like . What with cheap hookers on street corners, all types of massage parlors from low end to high class that cater to prominent New Yorkers, to escort services and the elite of the world’s oldest profession, high priced call girls. Regardless of its veneer, it is a world of hedonistic depravity where, for the right amount, anything can be purchased, including a person’s soul. The Devil must love big cities.

Former private investigator, John Blake, is attending and working in the Writing Department. That’s where he encounters the beautiful Dorothy “Dorie” Louise Burke, a young woman from , who has come to the Big Apple to make her fortune. Blake meets her as a student in one of his classes. Upon getting to know here better, he learns that there are cruel ghosts in Dorie’s past that ultimately steer her into the world of sex trade. She makes a living and pays for tuition by doing private “massages.” Having been raised in the city, Blake is non-judgemental. He thinks he’s seen it all and truly wants to be Dorie’s friend. When he finds her dead in her apartment, an apparent suicide victim, he refuses to accept the evidence. Blake is sure the woman he has come to love deeply was murdered by one of her perverted clients and thus begins his hunt into the depths of human cruelty.

The action and characters move quickly across the landscape of Blake’s hunt, but what is truly revealed isn’t so much Dorie’s past as Blake’s own inner demons. By the time he’s been shot at, kidnapped and framed for as yet another murder, John Blake slowly begins to understand he’s not as street savvy, or jaded as he perceived himself to be. As each new twisted, sick revelation is uncovered, his own spirit becomes mired in an unrelenting tragedy from which he has no escape. His footsteps lead him to a dead-end of the heart and a transformation that is both shocking and despairing.

There is little hope left in Aleas’ climax and that is the hallmark of noir thrillers. Noir is a pessimistic view of the world stripped away of false beliefs, without faith or any basic human decency able to stem the tide of darkness. If such turns out to be valid, then all of us had better start praying and fast. None of which lessens the end result here, SONGS OF INNOCENCE is a great book!