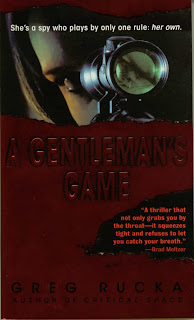 Greg Rucka first came on the scene back in 1996 with his debut novel, KEEPER. It was the first in a series starring professional bodyguard, Atticus Kodiak and it was an auspicious beginning. He followed it up with several new Kodiak books before getting into comics scripting where he wrote new Batman adventures for DC Comics. Rucka has a lean, tight prose style that made jumping between thrillers and comics an easy transition. Now comes a brand new series that emerges from that graphic media.

Several years ago, Rucka created British secret agent, Tara Chace for a comic series from Oni Press called; QUEEN AND COUNTRY. There have been several story arcs in this critically acclaimed series and now, at long last, he brings Chace to the world of prose drama. And quite honestly, that is where she belongs. Don’t get me wrong, I love comics and think the Q &C series is top-notch, but any comic can only go so far in character development, as it is a plot-driven, action orientated medium.

Now comes A GENTLEMEN’S GAME and for the first time, we readers are truly allowed into Chace’s mind and learn her fears, apprehensions and thoughts as she fights her way through a difficult, complicated assignment that almost marks the end of her career for Special Operations. The story opens with a group of radical Islamists blowing up subway trains in the greater area leaving dozens death or badly injured. The British government is incensed and wants retribution fast. Enter the Special Operations section led by Paul Crocker, a tough spy-master who is completely loyal to his agents, here called Minders and led by Tara Chace. She is Minder One, and has two subordinates, Minder Two & Three. Polite names for assassins.

When the mastermind behind the bombings is discovered to be a radical cleric, a sanction is placed on his head and Chace given the mission. Safely holed up in his home in , the religious mastermind is untouchable, until it is learned he is making a trip to to meet other Islamic leaders. Crocker is quick to deploy Chace and complete the mandate from his superiors. Chace, a courageous, lethal professional, manages to gain entry into the mosque where the target is holding religious services and there ends his life. In the process she also kills another man who was in conferences with her target. He becomes what is called collateral damage.

What Chace doesn’t know, until weeks later, safely back in , is that the second man she killed was in fact a member of the Royal Family of Saudi Arabia. The Saudis are enraged by the prince’s murder and begin sending out their own intelligent feelers to determine the assassin’s identity.

It is at this juncture that Rucka turns the entire routine spy thriller on its ear by twisting the plot into a truly unique and totally believable new path. One that finds Chace suddenly betrayed by her own government and left to flee both and her team. Labeled a rogue agent, she quickly becomes the target of every international assassin and it’s up to Crocker to figure out a solution that will both bring her in out of the cold, and exonerate her at the same time. What he comes up with had me flipping pages in a frenzy to reach the book’s slam-bang climax.

There’s a lot of Ernest Hemingway and Robert Ludlum feel to Rucka’s prose, with a healthy dollop of John LeCarre. A GENTLEMEN’S GAME is a solid winner in what I hope is going to be a long, long run for the lovely and lethal Ms.Tara Chace.

Thanks for the reading recommendation. Sounds super cool since I love Hemmingway and Le Carre.Thanks.

Thanks for stopping by, Sylvia. If you've never read Rucka before, you
are certainly in for a treat.
Ron