THE WOUNDED AND THE SLAIN 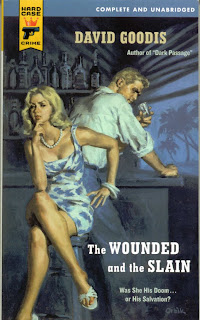 In our modern world where no intimate subject is taboo, it is routine to see television commercials about erectile dysfunction or prescription drugs to whatever ails us from clinical depression to enlarged prostates. Although these same conditions were present in 1955, they certainly were not considered polite topics of social discussion. Which is why David Goodis’ writing is so bold and daring. Goodis was not afraid to confront social taboos and expose them for what they were, all too familiar traits of frail, imperfect people.

James and Cora Bevan are having serious marital problems. Soon after their marriage, he discovers his beautiful young wife is sexually frigid. Again, one has to remember, these were the 50s, and what happened in a couple’s bedroom was sacred. There were no therapists or marriage counselors ready, willing and eager to help solve these destructive, psychological quirks. Unable to cope with the problem, James finds himself having an affair with a timid streetwalker that ultimately gets out of hand. When Cora discovers the arrangement, James, not wanting to end his marriage, breaks it off. A few weeks later he discovers his mistress has committed suicide. Because he blames himself, and Cora is still no more affectionate than before, he begins to fall apart, verging on a complete mental breakdown. He seeks help from a doctor and is told to take a trip, a vacation from his normal routine.

The estranged couple travel to the sunny , where their situation is no closer to be resolved than before. One night, while out drinking in the slums of , Bevan is attacked and in the process of defending himself, kills the mugger. Dazed and confused, he comes back to the hotel and the next morning confesses all to Cora. Before they can reach any kind of decision on what to do next, they are approached by a native who witnessed the crime and wants to blackmail them to keep his silence.

THE WOUNDED AND THE SLAIN moves at a relatively slow pace, which in this case serves it perfectly. Each scene seems to build one after another until what emerges is a very powerful tale of two lost souls struggling to find love in a world that is all too often cold and unsympathetic. How both James and Cora find redemption and each other is a poignant tale I will soon not forget. Kudos to Hard Case Crime for unearthing as yet another classic crime thriller.

I enjoyed this, but wouldn't want a stead diet of such things.

Anonymous said...
This comment has been removed by a blog administrator.
11:13 PM