A KILLING IN COMICS 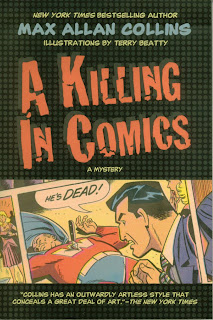 I’ve recently begun to think of writer, Max Allan Collins, as a Literary Master Chef with an overly generous disposition. It’s not enough that he serves up absolutely wonderful, tasty, delicious stories, but he always fills your plate to overflowing every single time. And this latest effort is no exception; A KILLING IN COMICS is filled with lots and lots of good treats.

Set in the post World War II publishing world of , the backdrop is the all too familiar story of the birth of American comic books. This isn’t the first time Collins has used an historical period to stretch his imaginative canvas against. What is both interesting and amusing is his own connection with comics. For a long while, he wrote the daily exploits of the country’s most famous cartoon detective, DICK TRACY. He also, with the aid of graphic artist, Terry Beatty, invented one of the most endearing fiction crime solvers ever to grace a comic book page, the sweet and deadly, MS.TREE.

Knowing Collins’ background, I was very intrigued to see what he would do with this setting. Since this is a work of fiction, he shoves his tongue firmly in his cheek and then proceeds to describe a colorful list of characters that any comic buff worth his Superman tee-shirt would identify in a heartbeat. Here are, albeit thinly disguised, the duo who brought forth Superman, only now they are given slightly different names and their mighty alien hero is called Instead of Batman and his real artist, Bob Kane, we find a vigilante named Batwing and his dapper, flamboyant owner, one Roy Krane. And so it goes, causing this reviewer to chuckle constantly from one page to the next. Collins’ is having so much fun here, it’s contagious.

Oh, and least we forget, there is a murder here and it does have to be solved. Employing the format of an old Ellery Queen and Rex Stout mystery, we are introduced to the entire narrative by one Jack Starr; a World War II veteran, now employed by his stepmother as a Vice-President (make that trouble-shooter) for the highly successful Starr Syndicate, which handles top-notch strips for newspapers around the country. Maggie Starr, his late father’s third wife, was once a famous striptease dancer before marrying the senior Starr and eventually inheriting the business. She’s a beautiful, smart cookie who appreciates Jack’s loyalty. They have a very good, easy going relationship.

When the head of comics is murdered during his own birthday party, suspicion turns to the two creators of Wonder Man, known to have a legal proceeding in the works against . At the same time the boys are also signing a new contract to bring another of their creations to Starr Syndicate. Maggie does not want her company associated with murderers and puts Jack on the case to help clear their names and find the real culprit. As always, Collins plays fair and the clues are carefully laid out as Jack begins his hunt through the world of the early burgeoning comic book community. It is done with such deft skill, a reader without any knowledge of how comics were started, will still enjoy this delightful book. It is full of colorful characters, clever plot twists and moves at a really good clip.

Comic fans will have the experienced heightened considerably, as I did, when recognizing those thinly disguised iconic figures who launched those amazing four-color magazines. An added bonus is Collins’ artist pal, Beatty, adds a handful of terrific comic illustrations to spice up the read. All in all, this is one of the most enjoyable Max Collins’ books I have ever read and, I for one, am keeping my fingers crossed we haven’t seen the last of Jack Starr and his sexy stepmother, Maggie. These two deserve to be brought back, and soon. And you deserve to do yourself a big favor and pick up A KILLING IN COMICS. You can thank me later.

I will be looking for the book this weekend. Your review got me very interested in reading it. The title reminded me of "The Comic Book Killer" by Richard Lupoff. I look forward to seeing how "A Killing In Comics" ranks against it.

Hi Ric,
I'm sure you are going to love
A KILLING IN COMICS. Believe me, this is one review where I didn't have to exaggerate a darn thing. The book is a hands down winner.
Ron

I really enjoyed this one. The puzzle was a little too simplisitic for my tastes, and the teetotalling non smoking of the protagonist seemed a little anachronistic to me, but the main thing was the book is a lot of fun.

The illustrations were fun too. I can't wait for the next one.