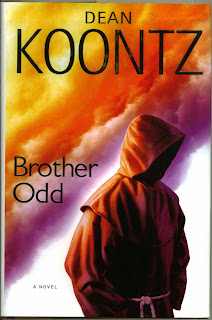 This is the third Koontz’s thriller starring the psychic fry-cook, Odd Thomas. He continues to be one of his best, most original characters and one with unlimited potential story-wise. Odd Thomas can see the dead, those spirits somehow still trapped in this reality and for whatever reasons, unable to move on to the next. All too often these visitations coincide with some horrendous evil about to occur and Odd finds himself racing the clock to both discover the threat and then thwart it.

In the first book, ODD THOMAS, it was a terrorist attack on a shopping mall. In the follow up sequel, FOREVER ODD, he dealt with a group of hippie Satanist who wanted to exploit his psychic abilities for their own ends. Now, months after that last adventure, Odd has sequestered himself in a bucolic monastery located high in the mountains of . He’s trying to get away from the world and his past in hopes of
coming to grips with the loss of his one true love. The monastery is also home to a mission school for disabled children run by a group of self-less nuns. It seems an isolated oasis far removed from his past, dark experiences.

Sadly, Odd simply cannot outdistance his own fate and when one of the brothers commits suicide by hanging himself from the bell tower, ominous signs begin to surface that can only spell something truly bad is on its way. Once again Odd is faced with discovering the source of impending doom, fully aware it is centered about the lives of the innocent children of the mission. Things go from bad to worse when a severe winter storm blankets the mountain top retreat trapping everyone. Odd, the monks and sisters, find themselves cut off from succor and having to relay on their own courage and faith to battle an unbelievable evil. Koontz’s villain is a truly bizarre and twisted creature with delusions of godhood; the veritable snake in the Garden of Eden.

BROTHER ODD is a suspenseful, expertly paced thriller that will satisfy even the most jaded reader. Personally, I’ve become addicted to young Odd and hope that a fourth chapter in his incredible life is soon to come our way.