IMARO 2: THE QUEST FOR CUSH 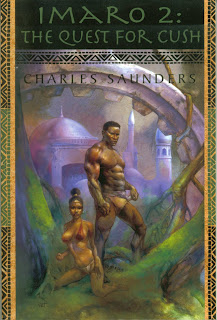 Hot on the heels of the first book in this epic saga comes the second volume relating the adventures of the warrior, Imaro, in ancient . Book one introduced us the bastard child, Imaro, born of the herdsmen tribe known as the Illyassai. His mother abandons him to the village elders at the age of five and exits his life completely, taking with her the secret of his father’s identity. The child is abused and ostracized by his kinsmen, yet finding a inner strength to match his amazing physical prowess, he grows the be the strongest Illyassai of them all. Then at the moment of his triumph, he turns his back on them, and the land that nurtured him, to begin his quest of self-discovery.

Along the journey, Imaro encounters, saves, and falls in love with the beautiful Tanisha and becomes the leader of an outlaw band. By the end of book one, his enemies unite against him to bring about the destruction of his outlaw army. Tanisha is kidnapped by a rival and Imaro left for dead. Things look bleak, but as long as there remains a single breath in his body, Imaro is far from being defeated.

THE QUEST FOR CUSH begins with Imaro’s obsessed hunt to rescue the woman he loves. Along the way he joins forces with a wily, sophisticated pygmy named Pomphis. Upon learning Imaro’s history, Pomphis believes him to be the end of his own personal quest. He explains to Imaro that the Africans gods of good and evil are in a state of constant warring; that they act through human agents here on earth and that his queen, Kadista of Cush, has foreseen the coming of a mighty warrior who will be instrumental in the victory over the black sorcerers who represent evil. By the time Imaro, with Pomphis’s aid, rescues Tanisha and battles still more minions of black magic, he comes to believe the little man’s supposition and agrees to travel with him back to .

Saunders writing combines the best elements of fantasy adventure’s two brightest stars. He marries the complex, intricate world and myth building of J.R.R. Tolkien with the frantic, non-stop action rousing exploits of Robert E. Howard’s Conan. The result is sword and sorcery taken to a brand new level of sophistication. The Imaro saga is classic stuff and I one for can’t wait for the next installment.