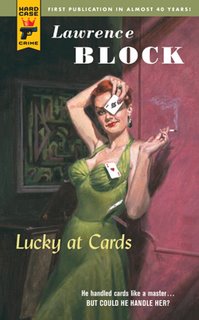 Since arriving on the publishing scene two years ago, Hard Case Crime, has set about reprinting classic crime novels. That it's not surprise that LUCKY AT CARDS is the third such book they have acquired from Grand Master Lawrence Block. No one, except maybe the late Jim Thompson, captures the world of confidence men, and women, better than Block. One has to wonder at his own background. I find it hard to believe that his intimate knowledge of the hustle could be acquired simply by research. Maye some day he'll write an autobiography and fill us all in on how he does it.

For now, we have this 1964 thriller back in print for an entire new audience of mystery-thriller fans. Bill Maynard is a second rate stage magician who gets pulled into the world crooked card games when he is taught how to use his hand dexterity to manipulate a deck three-ways-from-Sunday. Sleight of hand used to cheat people. No longer an honest, two-bit performer, he becomes what is referred to in the criminal circles as a card mechanic.

When fate, and a few broken teeth, land him in a small, out-of-the-way town, Bill plans on sticking around long enough to see a dentist, shill a few locals in a poker game and then beat it for greener pastures. All well and good until he meets Joyce Rogers, the sexy wife of the insurance salesman in whose home the poker game is being held. When Joyce arrives at his hotel room a few hours later and confesses she is from the wild side of the tracks and sees him for the hustler he is, things begin to heat up. Joyce is going crazy stuck in the role of dutiful housewife and desperately yearns for excitement in her life.

Before you can blink, she and Bill are naked and devouring each other physically as if the world were going to end the next day. Joyce Rogers is a femme fatale of the deadliest sort. She wants to run away with Bill, but not without her husband's money. Together they hatch an elaborate sting to achieve that goal. Like all good noir stories, this one has some very unexpected twists and by the end, both Bill and Joyce discover that even a square, unimaginative man like Murray Rogers can become a deadly opponent when the tables are turned and the cards hold a hidden joker.

Block captures all the nuances and tightrope morality of people who live in the shadows with extreme poignancy. He never white-washes them into Hollywood stereotypes, but rather finds the core ambiguousness of their natures. After all, why would anyone in the world want to spend their lives cheating people? Yet, every day, hundreds live that life and are very, very good at it. Reading LUCKY AT CARDS may not explain why they do it, but it will show you how they do it. Get ready for an education.
Posted by Ron Fortier at 5:50 PM

I've actually added this to my Amazon list after reading the review. You know I'm a fan of HCC. However that being said the coming year has titles few and far between that interest me. This however is one of the more recent ones I do want to read.

Smart move, Anthony. This one is very much a winner. Was telling Valerie the other day, it's one of those books I would love to see made into a film.

Love that cover. This one I'lldefinitely have to read.

I finally got this. I really enjoyed it. It has a real moral: The people busy being too hip for the room miss out on a lot of the good stuff in life. I'm not a real fan of the con man genre, but I've enjoyed all of these HCC novels from Lawrence Block.