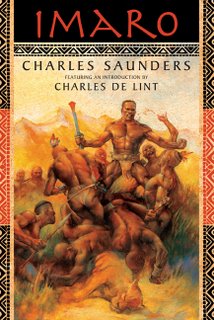 A long time ago, back in the 70s, DAW books published a trio of books starring a powerful black warrior named Imaro. Mirrored somewhat on Robert E.Howard's classical barbarian figure, Conan, Imaro strode a new and vastly unexplored wilderness few western readers were at all familiar with, Africa.

No, not the Africa of Tarzan and Trader Horn movies that so proliferated the American consciousness of the 1920s and 30s, but an Africa based on authentic myths and legends of that magnificent, nature rich continent. And all of this was the product of an imagination unlike any other to come down the literary halls of fantasy writing. Charles Saunders, like his brawny protagonist, is a large, imposing African-American with a ready smile, marvelous sense of humor and a gift for words that quickly established him as a strong new presence in the American fiction genre.

Sadly the editors of DAW fumbled the ball in marketing this new, and vibrant character and ended up labeling him either "the black Conan" or even more embarrassing, "the black Tarzan."
Imaro was/is neither. He is unique, an original hero who lives his life against the colorful background of a world that sprang from the true, authentic myths of the real Africa. Thus this lack of editorial understanding of the material presented to them, doomed the series to a very quick cancellation after only three volumes. Saunders had in fact written four and had a fifth well in development when this abrupt ending was forced on him. And on that day, fantasy and adventure readers lost something truly special. As one of the few lucky souls to have found and read those three books, I can attest to this loss personally. It seemed Imaro's legend would die before it had really begun.

Jump ahead thirty some years and along comes publisher, Night Shade Books, wanting to resurrect the charactre and the series. Luckily they were able to convince Saunders to dust off his remarkable creation, revamp some of his early chapters to better adjust to modern sensibilities (Saunders is all too aware of current African politics, recent wars and acts of genocide to allow his fiction to exploit such atrocities). And now, a brand new edition of IMARO is once again on the book racks of America, and hopefully this time, with a dedicated publisher, is going to find an eager audience that will soon be begging for more.

Having read both the original version of this book, the first chapter in Imaro's saga, and the new released edition, I'm here to give everyone involved a round of applause. This is by far one of the best adventure books I have read in years. Saunders has matured as a writer and his use of words to convey a sense of time and place is unrivaled among today's fantasists. Do not miss IMARO. You've been given a second chance at a classic, don't blow it. You'll be sorry you did.
Posted by Ron Fortier at 7:24 AM

Ron, is this the first of the 3 volumes you mention or the 4th that was never published? Will they ultimately be releasing all of them?

Correct the first time, Larry. IMARO is a reprint of the first book in the series, though a good 30% of it is new material, as I stated, having been rewritten extensively. The plan, of course is to publish the entire series but that will depend solely on the success of this and subsequent volumes. So please, if you have friends who enjoy truly good sword and sorcery, point them to IMARO. Thanks.