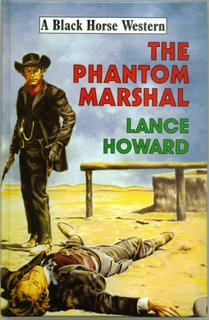 Writer Lance Howard is an avowed pulp enthusiast and when he first began writing for the British label, Black Horse Western, it was inevitable that he would bring some pulpish elements to his horse operas. THE PHANTOM MARSHAL is such a book as ti combines the traditional cowboy vengeance plot with touches from the hero pulps, especially the Shadow and the Black Bat.

Print Madsen was the marshal of a small New Mexico town called Blakewood. Everything was peaceful and quiet until the Gauvin brothers, Cort and Hank arrived. Both had ambitions that involvled breaking the law to get rich and famous. Cort started a big cattle ranch from ill-gotten gains and had dreams of becoming the state governor one day. Younger brother, Hank, opened a saloon and was willing to settle for simply running the town. Of course Madsen, and his younger brother, Mark, were going to be impediments to those grandiose plans. Thus the Madsens were attacked one night by a group of thugs led by the Gauvins. Mark was killed outright and Print was beaten to within an inch of his life and his broken body thrown into the river.

This is all back story. The book opens two years later when the members of that killing party, one by one, fall victim to a mysterious masked avenger in black. This murderous wraith strikes without warning and shows the badmen no mercy. On their bodies he leaves a marshal's badge in which a cross has been scratched. Cort and Hank recognize it as the same badge worn by the dead Print Madsen. Has his avenging spirit returned from the dead to wreak bloody retribution? Or is the masked rider someone else altogether with a different agenda? Before the book reaches its gun-blasting climax, many more hombres will fall at the hands of the Phatom Marshal.

A quick note. Although Black Horse Westerns are produced in England, they are easily available through Amazon.com in this country. Try one. They are much fun.
Posted by Ron Fortier at 10:56 AM

Great review! I've been wanting to pick up one of Howard's westerns and you just sold me on this one.

You won't be sorry, Wayne. It's superbly well handled and I know you,
for sure, will love those pulp touches. Thanks for reading.