THE GUNS OF HEAVEN 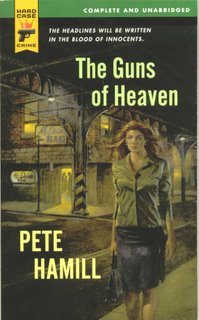 Do not be surprised if in the coming weeks and months you find lots and lots of Hard Case Crime titles appearing in this column. They are by far one of my favorite publishers and I am always eager to pick up each new title they put forth. HCC is about bringing back the true noir pulp fun of paperbacks that were so prevalent in the 60s & 70s via outfits like Gold Medal and Fawcett and Ace. And that's exactly what they do, combining terse, gripping fiction with brilliant new covers by today's finest painters.

Okay, enough about the company. Let's dig into the book itself First published in 1983, the setting is Ireland during a very turbulent time in its war between the North and South, Catholics and Protestants. It is amazing to think that in just twenty or so years we've all but forgotten about the bloody conflict that ravaged that island country, as we've now turned our attention on the Middle East and it's violent problems. Seems like one war after another, and still with some kind of fanatical religious underpinings. Pete Hamill's protagonist is a New York City reporter named Sam Briscoe, sent to do a story on the Irish Republican Army and their mysterious leader. In the process Briscoe is recruited to hand deliver a message from this shadow commander to IRA sympthizers back in America. He agrees to do so reluctantly and almost immediately comes to regret it when he is followed to Switzerland by gunmen. Briscoe realizes he has foolishly put both himself and his eleven year daughter at risk and quickly delivers her to Spain into the care of her mother, his ex-wife.

Back in New York, Briscoe attempts to the deliver the envelope only to have the intended receiver murdered in a terrorist bombing of an Irish bar. Then he discovers his daughter has been kidnapped and smuggled into America. Unless he cooperates with the kidnappers, she will be tortured and killed. Now he's on his own, realizing her safety depends on his ability to find her and deal with his enemies. That he becomes obsessed and ruthless in his quest is what drives the second half of this thriller and keeps the pages turning. Hamill is good at building suspense, but even more so at setting his stage with complex characters and twisty political knots that don't get unraveled until the very last chapter.

THE GUNS OF HEAVEN is effective, powerful drama. That it is tragic is also worthy of attention. People do have the power the make this a better world. This book wonders if they have the courage to do so?
Posted by Ron Fortier at 2:32 PM

I've gotta say, this is one of my least favorite HCC novels.

It already seems more dated than Plunder The Sun.

I'm going to have to echo Glen's comments. To date, I have read something like 12-14 HCC books. This one is last in my book. I listened to the audio and the reader was good.

Wow, Scott, thanks for perusing the archives here. I rarely go back into these old reviews, and doing just now, was a nice trip down memory lane. HCC has been from the start a big part of PULP FICTION REVIEWS. Some have certainly been hit or miss.
Stay tuned as I've got two preview
titles I'll be review of Fall releases in the next few weeks. And thanks for the comments.