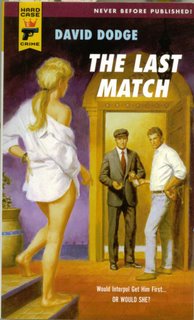 David Dodge was a bestselling travelogue and suspense writer back in the 50s & 60s. His most famous novel, TO CATCH A THIEF, was made into a popular film by Alfred Hitchcock and starred Cary Grant and Grace Kelly. Dodge's greatest passion in life was traveling and he used writing to support that wanderlust. He also had a real fascination for bunco artist, commonly referred to today as confidence men.

Dodge died in 1974, short after finishing THE LAST MATCH. The manuscript was filed away with his other papers and would not see the light of day again until 1998 when it was uncovered by his daughter, Kendal. An editor friend suggested she show it to Charles Ardai of Hard Case Crime. HCC had last year published Dodge's South American thriller, PLUNDER OF THE SUN, and was very eager to read this long lost novel.

Now, thirty-three years after it was first written, THE LAST MATCH, is published much to the pleasure of suspense lovers everywhere. The book is classic Dodge in that it begins in France, then jumps to South America, the US East coast and North Africa before ending on a small island off Sardinia. It is a book filled with wonderfully drawn characters, exotic locales and a very tight, twisty plot that delivers a marvelous and satisfying climax.

Curly, our hero and narrator, is a discharged GI who chooses to remain in Frnace after World War II. Curly is also a likeable grifter who sees unlimited opportunities for a man of his less than honest talents. In the course of plying his shady trade, he meets a sophisticated British blonde who seems obsessed with humiliating him at every turn. There are also a couple unsavory French and Corsican gangsters who cross his path. Throughout the first half of the book we follow Curly along on several elaborate scams. The guy just loves the con.

But when he starts running afoul of the law, Curly packs his bags and heads for warmer, safer climes and ends up in Peru and eventually the Amazon. There another series of misadventures results in a reunion with the straight-laced British femme fatale and a surprise development he is totally unprepared for.

THE LAST MATCH starts slow and builds methodically. Don't let it's steady, plodding pacing put you off. By the half-way juncture, things pick up and the Dodge amps the speed to a roller-coaster finale just as taut and suspenseful as any thriller I've ever enjoyed. This book isa treasure and kudos to HCC for bringing it to us at long last.
Posted by Ron Fortier at 1:58 PM

I thought it rambled a bit, as many picaresque novels do, but I still enjoyed it immensely

Glen: Like you, I thought The Last Match rambled a bit, which is why I liked Plunder of the Sun a bit better. The biographical note from Dodge's daughter gives a possible clue: Dodge wrote the book after he had stropped traveling, and he pulled together recollections from many different journeys. That could make for a rambling story.