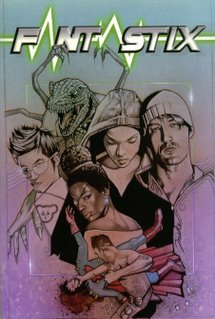 Superheroes have been around since Superman first took flight from the imagination of Jerry Seigel and Joe Shuster. The thing was no one ever took them seriously. Once the American comic book was fully established by the end of the 1930s, it was as a media of make-believe directed solely towards children.

In the 196os, Stan Lee began to chip away at this immovable label by writing characters that were both amazing with incredible powers while at the same time still very much human as they grappled daily with the same problems all of us face. This new pseudo-realism would reach its culmination peak with the publication of Alan Moore's maxi-series, THE WATCHMEN. Suddenly there was an earthy, fragile unmasking of what true heorics meant to all of us. It was an adult story for an adult audience and superheroes were no longer the exclusive reading material of children. They had grown up.

It wouldn't take long for other venues to latch on to this new found, dramatic maturity. Although the 70s, 80s and 90s would give us new film interpretations of Batman and Superman, they were still mired in adolescent mentality, as is evidence with how quickly the Batman franchise quickly spun out of control with each new entry and was ultimately relegated to a live-action-cartoon status. The movies might have had the right intentions, but they simply didn't understand the true concept of superheroes.

Along comes M.Night Shyamalan and UNBREAKABLE. The first true, adult superhero movie ever made. Bruce Willis' character doesn't have an origin story. He doesn't come into his powers easily or eagerly. They frighten him. There are no lofty vows to fight evil and corruption. Rather the film is a journey of self-discovery and clearly puts forth the theory that evolution isn't quite done with the human race. Can REAL superheroes some day walk among us?

Time jump to the present. The hottest new hit on the boob tube is HEROES, a show about every day people suddenly discovering themselves possessed of truly supernatural powers. What happens next? From week to week the writers of this teleplay have begun a weaving, mesmerizing, completely addictive series that tries to answer that very question. Be they villainous, or heroic, the characters on HEROES are finding their way and it seems millions of us have come along for the ride.

Likewise this new thriller by Bobby Nash. FANTASTIX is a story of a world where superheroes have been around for a long-long time. Now something is systematically killing them off and therein lies the mystery of both their beginnings and their future. Nash, himself a comics writer, has a leg up on his writing peers as he gets what the true underlying core of heroism is all about. As we follow Rob Temple, once known as Visage, on his own journey of self-discovery, the road leads to sacrifice for there can never be heroism without selflessness...and selflessness is at the heart of sacrifice.

The story begins when Dominus, a thinly disguised Superman archetype, is found brutally battered to death. The police, the government and a secret agency, known only as Haven, all become embroiled with the fate of the world's meta-humans. Temple and his young sidekick, Mouse, soon find themselves allied with three very unique people; Frisk, the sexy black chick who is practically invulnerable; Lore, the shy, quiet girl with the ability to bend people to her will, and a were-beast known as Kracklin.

Together they search out the truth behind their own lives and the dangers that threaten to destroy them all.

This is only Nash's second book and it is wonderfully executed. He has matured considerably as a writer since that first offering and the control with which he spins this yarn is both deft and entertaining. I really enjoyed reading this book and came to love these characters. If superheroes are your cup of tea, do not pass up FANTASTIX. It has a lot to say.

The book is available on-line from Lulu.com
Posted by Ron Fortier at 2:10 PM

Bobby Nash is coming into his own as a very gifted writer. I have read his previous book and it was awesome!

WOW! Thanks Ron and Anonymous. Kind words. Thanks for reading my books.

My name is Jason Powell and I am co-owner of FYI Comics (www.fyicomics.com) and creator/plotter/editor/publisher of "FANTASTIX". 1st of all, I want to say thank you to Ron for such an awesome review. Bobby and I have put years into this project and it trully shows. Besides being one of the greatest writers I know, Bobby is an extremely nice guy and a good friend. Once again, thank you Bobby! 2nd, for all of you fans -or soon to be fans- keep an eye on our websites (www.fyicomics.com or www.bobbynash.com) cause we have two great comic book projects in develepment for next year - "YIN YANG" and the comic adaptation of "FANTASTIX" -- both written by Bobby Nash. Both are trully awesome works. THANKS!

Hi Jason, and thanks for all the great info on the FANTASTIX comic. I am so looking forward to that series. Please keep us posted.

This looks like another great book for me to read. I'll see if I can find it this weekend. Thanks.

Hi Ric,
As I said in my review, if you like comic-book type action done with an adult sensitivity, this is the book for you. Note, it is only available from Lulu.com -

Actually, Fantastix is available through Amazon as well. Thanks for checking it out, Ric. And thanks for the kind words, Jason.