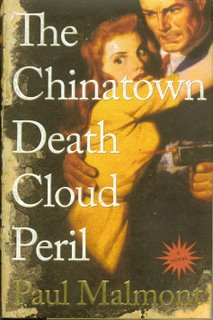 No fan of pulps should miss this true homage to a glorious, long-ago age when gifted writers made a penny-a-word living and in the process entertained an entire generation hungry for escapism and heroes. This book is a humdinger.
Posted by Ron Fortier at 1:06 PM

Great site, Ron. I haven't read any of these books, so now I have three more for the To Be Read pile.

I absolutely love this book. It should be a part of any pulp fan's collection. It's a fun read, yet based in reality, yet all too pulp. You never know what's going to happen and or what to think.

Hi Mark, and thanks for stopping by.
I am going to post a link to your site as well and tell my readers about
your marvelous Podcast of Horror.
The new one is up now, in fact.
Just fun stuff.
Anthony, I know you loved this book as much as I did. Agreed, no pulp diehard should be without it.

I've been looking to pick this book up for a while, with any luck I should have it this weekend. It will go to the top of my "To Be Read" mountain. Excellent review it makes me want to read it even more.

Ric, thanks for dropping by and reading the reviews. Please, after
you read this fantastic book, drop me a line and let me knwo what you thought. It truly was one of those rare books that I just didn't want to see end.

I'll have to keep an eye out for it when I have some extra money in my pocket, Thanks Ron.

I was unaware of the existence of this book until I caught wind of it on Golden Perils, and now with your ringing endorsement, it has become my next "must own" property.

I am in your debt sir!

I just finished the book and you are right, I hated to see it end. Hopefully we'll see more from this promising writer.

I've had this book for some time now, having purchased it on your recommendation, Ron and I'm just now getting to it. I read the thing in two days flat. A wonderful thrill-a-minute adventure and I loved every scene Lester and Norma Dent were in. The book is a must read for any pulp fan.

Hi Derrick. Thanks for letting me know you finally read The Chinatown Death Cloud Peril and enjoyed it as much as I did. Amazing book. Wish he'd sit down and do a sequel.