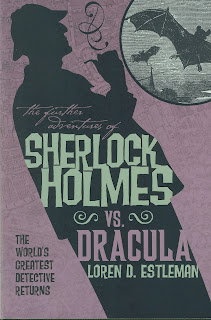 There have been numerous Holmes pastiches that pit him against the King of Vampires. Some have been decent, others abysmal and a very few extremely well done. This tome falls totally in the latter category and is a great deal of fun. Estleman’s plot is cleverly woven around Bram Stoker’s famous story so that those familiar with it will easily recognize those scenes when intruded upon by Holmes and Dr. Watson.

Which is his main approach sticking to Conan Doyle’s own styling in which the good doctor is our narrator. Holmes is brought into the matter when asked to visit the seacoast town of Whitby shortly after a ship from Transylvania has crashed upon its shores due to a horrendous sea storm. The ship is discovered abandoned except for the dead captain tied to the wheel. Witness also report having seen a massive dog leaping from the craft onto the beach and disappearing into the night.

A few weeks later the famed detective learns of a series of child kidnapping plaguing the neighboring communities reported to be the work of a female like wraith in white. Quick to take up the hunt, Holmes and Watson arrive in time to witness the destruction of the vampire by Doctor Abraham Van Helsing and his allies. And just like that Conan Doyle’s hero collides with Stoker’s masterpiece of horror.

The book is so much fun but its strongest element is how wonderfully Estleman portrays the relationship between Holmes and Watson. Over the years, hundreds of writers have taken on this duo and their amazing friendship. Estleman underscores the loyalty to the max and then gives us insight into how much the Great Detective actually appreciated his true brother in spirit. “Sherlock Holmes VS Dracula” is well worth your time. It satisfies from first page to last.