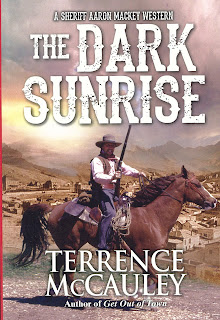 With this fourth volume, the saga of former Army cavalry officer turned U.S. Marshal; Aaron Mackey comes to a gun-blasting finale. As in most such series, one hopes the final chapter will prove worthy of the preceding volumes and this one delivers on that in spectacular fashion.

After months of battling with the malicious con-man James Grant, Mackey and his deputy, Billy Sunday, believe they’ve gathered enough evidence to have him either hung on incarcerated by federal judge in Helena, Montana. Much to their frustration, Grant hired a savvy attorney who underscored that most of the evidence is circumstantial and simply is not enough to convict Grant. In the end, Mackey has no choice but watch his nemesis escape justice and return to his hometown of Dover Station while he remains in Helena to take up his duties as territorial marshal. His only hope is that Grant’s influence, along with his ill-gotten gains have been diminished to the point where he is no longer a threat to decent people.

Unfortunately Mackey is proven wrong and Grant waste no time in hiring Nathan Rigg, a former Army officer who once tried to have Mackey court-martialed. Rigg is as cruel and sadistic as his employer and together they plan the total destruction of Dover Station.

“The Dark Sunrise” is a moving, powerful story that rewards readers of the previous three volumes. It is fast paced and packed with gun-blazing action from start to finish. All the while delving into the Mackey’s character in such a profoundly intimate fashion and to make him one of the greatest western characters to ever grace such a series. Terrence McCauley is a writer to reckon with and we really cannot wait to see what he’s got for us next up. Meantime, get these Aaron Mackey books and saddle up for a classic western adventure.