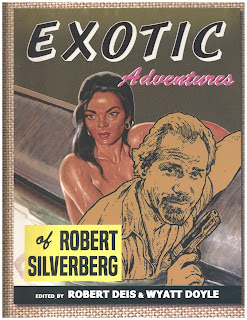 Robert Silverberg is one of the best known science fiction writers in the world. He is a multiple winner of both Hugo and Nebula Awards, a member of the Science Fiction and Fantasy Hall of Fame and a Grand Master of SF. A voracious reader since childhood, he began submitting stories to science fiction magazines during his early teenage years. He received a BA in English Literature from Columbia University in 19567. While at Columbia, he wrote the juvenile novel “Revolt on Alpha” (1955) and won his first Hugo in 1956 as the "best new writer".

Now MAMS (Mens Adventure Magazines) historians Bob Deis and Wyatt Doyle have collected 20 of those stories and articles in their latest release from their terrific Men’s Adventure Library series. They are eye-opening to say the least. Read in the context of the times, the stories, most of which are purely fiction, range from outlandish sexual encounters ala an island of sex-starved women, to supposedly investigative reports on the brothels of Juarez, Mexico. There’s an article on buying liquor in Europe alongside an expose of the Arab slave trade. Most are written in first person to add to the believability of each tale. Like his pulp heroes of the past, Silverberg wasn’t trying to produce great literature here, he was trying to earn a buck and he was damn good at that.

Some of the elements to take note of are the geographical settings detailed in those stories taking place in far off exotic locales. All of which added to the overall atmosphere of the stories themselves. Then Deis and Doyle have too much fun filling pages with old 50s ads from the “Invigorator Pill” to Joe Weider “Muscle Builder” programs. “Exotic Adventures of Robert Silverberg” is clearly a one of kind reading experience and an amusing look back on a time readers looked for the unexpected and weren’t so easily offended as today’s overly demure generation is. Thumbs up pulp aficionados, this is the good stuff.