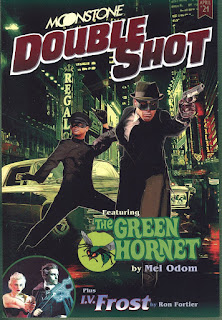 The Hornet novella springs from Mel Odom, and the Frost short story from Ron Fortier. The tales complement each other well, making this Moonstone submission a literary winner on both counts, abetted by a crackerjack cover from Malcolm McClinton and striking interiror illustrations from Segio Ibanez.

For Odom’s adventure, “The Hornet’s Big Score,” Britt Reid and Hayashi Kato face a killing spree frm the crafter crime lord Kavieff and race forth to snuff the carnage. The Detroit esacpage proves touchy but our resilient duo fights on to right a great wrong in this sizzling exploit. Kato is an admirable stand-out in this yarn, with plenty of Bruce Lee panache to spare, but Odom nails it a hundredfold with the Hornet, capturing the particular essence that Van Williams brought to the suave Britt Reid. On this basis, fans of the classic television series will be more than pleased. But anyone who’s encountered the Hornet & Kato’s adventures, no matter their incarnations or contexts, are certain to give “Big Score” a big thumbs-up.

In Fortier’s Frost caper, “The Vanishing Train,” our cool criminologist and his scrupulous, Harlow-ish confidant, Miss Jean Moray, investigate a missing locomotive. How could an object so massisve just disappear? That’s the clever angle of this crispy written mystery, which will leave readers conjecturing to the hilt. Beyond its nifty slant, the characterizations fuel this entry. Fortier gives a noble job of giving Frost his frosty demeanor, but Moray is the story’s beacon; a woman who’s smart, pretty and tenacious in the best, cool-headed way. Thanks to Fortier’s interpretation, she’s more than a sidekick, but one who possesses forefront, Emma Peel appeal.

Don’t miss out on this momentous debut of new Double Shot series from Moonstone Books.