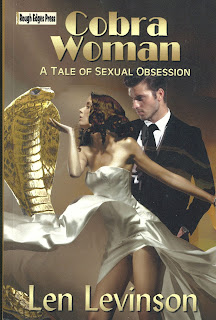 When he was a young boy, Sam Wishnefsky saw an old 1944 movie called “Cobra Movie” starring exotic beauty Maria Montez. In it the South Seas temptress dances the alluring snake dance and is forever imprinted on Sam’s psyche. Years later, at 26, he’s living in New York City working as copy-writer for a direct-mail outfit called Vortex. It is the late 80s and personal computers are still years in the future. Sam is relatively happy with his life until one night, while attending party of hip, chic, know-it-all bohemians; he encounters a stunningly beautiful Maria Montez look-alike.

Gabriella is a Cuban refugee from Miami. U.S. What Sam isn’t told is that she was once wed to a New York mobster and has two little girls. Oh no, all poor Sam can see is the reality of his lifelong sexual fantasy brought to life right before his eyes. He waste no time in courting the Latin spit-fire whose command of English echoes band-leader Ricky Ricardo of the famous “I Love Lucy” television series. Even though these two star-crossed lovers have absolutely nothing in common, he’s a good Jewish boy while she’s a hoodoo lapsed Catholic, they discover that when in the sack they are pure dynamite. The sex is fiery and all consuming. No surprise, they marry.

Then Sam discovers he has two stepdaughters and a mother-in-law moving in with them over night. The poor sap has tied himself to a temperamental she-devil and before he cut himself lose, she’s pregnant with his child. What is even funnier is that Sam finds release from his daily suffering by using his experiences to write new self-help brochures that are bogus scams meant to solicit money from the consumer for non-existing books. He’s not only good at it, but since his hellish marriage, he unwittingly becomes the Messiah of the Downtrodden and increases Vortex’ profits tenfold. Naturally they don’t tell him any of this, as it is against their policy to reward achieving employees fearing it will simply want to quite to seek employment elsewhere. There C.E.O. is Mr. Saito, a business Samurai who sees honor only in sacrifice.

“Cobra Woman” is one of the most hilarious satires on our times we’ve ever read and Levinson’s insights into the machinations of our material world are sharp and scathing. There is nothing off bounds to his magnifying lens as it scrutinizes our mores and empty lifestyles. The story of Sam Wishnesky still mirrors that of many men and woman today, looking for success by chasing fantasies. And that never ends well.