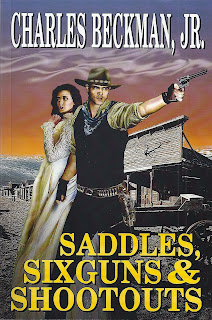 The latest story in this new collection by writer Charles Beckman, Jr. is dated 1956 so the odds are most of you reading this volume weren’t even born when these were published for the first time in various western pulp magazines.  Now, thanks to the easy accessibility to self-publishing, books like this can be produced and made available to an entire new generation of young pulp enthusiast.  Beckman, during his long career, was one of the hundreds of veteran pulp scribes who pumped out scores of stories in every genre imaginable to earn a living.  Was it great literature?  Hardly.  Rather pulps were the epitome of escapist, entertaining fiction intended not for academia but for the average reading Joe and Jill.

As this new book proves readily, when it came to entertaining fiction, no one took a back seat to Charles Beckman, Jr.  This title features his western yarns and contains a neat dozen.  So saddle up for some genuine wild-west adventures.

BRAZOS WOMEN encapsulates the history post Civil War Texas as seen from a Southern Belle who has escaped the sexist prejudices of New Orleans to make her fortune on the frontier.  It is wonderfully told and Beckman does a deft job of setting an authentic background filled with tragedy and triumph.

BAD MAN FROM BOSTON has greenhorn Art Billows coming to grips with his dreams of being a hero and willing to sacrifice all for one minute of bravery.  While in RUSTY GUNS an old gunfighter seeks revenge only to find redemption.  Clayton Traveler in THE KID COMES BACK follows a ten year old trail to get justice on the men who murdered his father and stole their home.  Jimmy Laredo is an orphan with the face of an angel and the soul of killer unable to escape THE LAST BULLET.  Whereas ex-outlaw, Ollie Towns finds his past hot on his heels in time for him to catch the STAGE COACH TO HELL.

Ex-Confederate soldier, Jim Brady, comes to a small Texas town to start a new life all because of a photograph in HOME IS THE KILLER.  One of my favorites here.  Then tough town-tamer Bull Huler has to decide whether to reconcile with the woman who deserted him, or not, in BITTER REUNION IN RIMROCK. All of Beckman’s stories are infused with simple but powerful human emotions that resonated with this reviewer. Sometimes fatalistic, his men and women are rugged pioneers coping with the ever expanding frontier that will either bring their lives success or tragedy.  THE DEVIL’S DEADLINE tells the story of Ed Brennan, a small town newspaper publisher who finds the courage to stand up to a corrupt sheriff, even though it means the end of all he ever hoped for.

And finally, the book ends with another novelette, HELL’S CARGO; the story of a young riverboat captain who comes home from the Civil War to face the man who stole both his boat and his woman.  It is a fast paced, superbly written tale of the lost glory of the old steamboats that plied the Mississippi and Missouri rivers between St.Louis and New Orleans before the coming of the railroads.  It’s a grand adventure and just the right way to close out this truly excellent collection.

We’ve enjoyed every Charles Beckman, Jr. story we’ve ever had the pleasure of reading and this new title is no exception.  Beckman was a true pulp veteran who could spin a tale with the best of them and SADDLES, SIX-GUNS & SHOOTOUTS proves that beyond a doubt.  Recommending this book is a no-brainer, folks.  You owe tit o yourself to learn what good writing is all about.
Posted by Ron Fortier at 3:01 PM