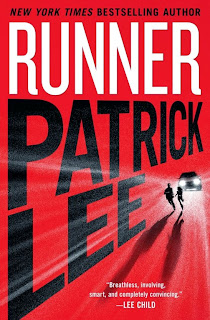 Patrick Lee burst on the scene with a trilogy for the ages. The Breach novels were three of the finest action novels I've had the pleasure to read and I was chomping at the bit to see what Lee had up his sleeve for a follow-up.

RUNNER is that follow-up to the Breach and it does not disappoint!

Sam Dryden, a former special-forces operative, is living on auto-pilot following the death of his wife and daughter. One night, plagued by insomnia, he feels compelled to go for a run on the beach during which he runs into a frightened eleven-year-old girl on the run from a group of armed men. Dryden gets involved and they elude the pursuers at least for the moment.

But the group after the girl are a determined bunch and they've got state of the art gadgetry to corner their prey - so long as their prey isn't Sam Dryden. Using tracking satellites, mis-information to the media and dastardly doggedness, Sam and Rachel are running for their lives. And make no mistake, the group is not thinking of capturing the pair, this is a search and destroy mission.

What follows is a breath-taking, full-tilt, action yarn that does not let up until you hit the last page. Part Jack Reacher, part FIRESTARTER, Lee's RUNNER combines the best elements of both. His characterization is excellent. Dryden comes across as a damaged yet capable human being and Lee makes sure Rachel never strays into the smart-mouth, precocious kid minefield. Twist and turns abound and this is where Lee shines. He has the uncanny knack of slowly unveiling the details while Sam and Rachel flee for their lives and the plot unfolds with tantalizing slowness, just enough to keep you reading until Lee pulls the rug out from under you time and time again.

But where Lee excels is in his payoffs. Once the main thrust of the plot is revealed, any experienced reader could fill in where they think the story is going only they'd be wrong. Lee keeps the standard action, suspense framework of the novel fresh and, although the final payoff does not quite reach BREACH's mind-blowing levels, it is still satisfyingly different and engaging.

With characters you care about, and an unpredictable plot, RUNNER is sure to satisfy any action junkie. I tore through the thing and am already anxiously awaiting Lee's next effort.
Posted by Ron Fortier at 7:27 AM

I only just read this and have to say it is as great as you say.