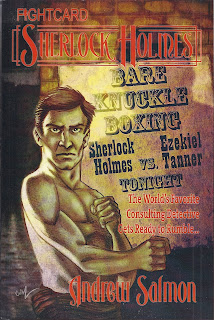 Now Salmon has taken his affinity for these characters and given us his longest Holmes story yet; one wherein the famous sleuth is tested both physically and mentally.  The Fightcard books, established by writer/publisher Paul Bishop, is a popular series that has quickly revived a classic pulp genre, the boxing stories, by new and exciting writers.
Bringing Holmes and Watson into the 1880s London underground world of bare-knuckle fighting was a stroke of genius first suggested by Bishop and now brilliantly realized in this new title.

Easily one of the author’s most daunting challenges, Salmon clearly did his homework and offers up a terrific adventure that is both historically accurate in its setting and at the same time true to the classic Doyle formula of presenting our heroes with a unique and macabre murder mystery.  With only a few days before Christmas, 1884, Sherlock Holmes engages in a friendly boxing match with an old friend as another of his many personal challenges to better himself.  No sooner has the bout ended then someone enters the hall screaming, “Murder.”  Disregarding his own lack of clothing, Holmes rushes into the snowy night clad only in britches to find the dead body of a young man apparently strangled to death.  But the victim’s footprints are the only ones to be found in the pristine white snow around his body?

And just like that the game is afoot as Holmes and Watson find themselves plunged into a deadly affair filled with sadistic killers, clever counterfeiters and a monstrous ex-pugilist named Tanner who has no qualms about eliminating any who stand in his way.  Thus as the wintery holidays draw near, Holmes and Watson race against the clock to solve not one, but two heinous crimes while matching wits with a diabolic fiend hidden in the shadows.  In the end, Holmes must once again step into the ring and put his life on the line against a sadistic brawler or all will be lost.

“Sherlock Holmes : Work Capitol,” is easily Andrew Salmon’s finest work to date and is destined to become a classic amongst diehard Holmes and fight fans alike.  It is a reading experience to be enjoyed and savored and it is poetically fitting that it comes to us now at Christmas time.  Thank you, Mr. Salmon, for this marvelous literary gift to us all.