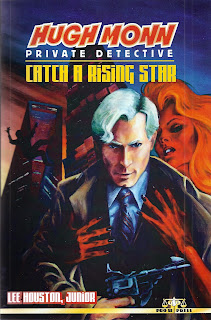 Houston delivers all the standard wise-cracking humor these kind of mysteries of noted for and it is surprising how well the form works even in such an exotic off-world setting.  All the while reading “Catch A Rising Star,” I was reminded a great deal of those wonderful Shell Scott mysteries by the late Richard Prather.  That both Hugh and Shell have premature white hair just can’t be a coincidence; can it?  This is a marvelous book written by a talented writer who knows both genres well and thus merges them so smoothly as to be totally entertaining.  This book cemented my membership in the Hugh Monn fan club, a group that’s about to get a whole lot bigger.  Take my word for that.
Posted by Ron Fortier at 1:50 PM