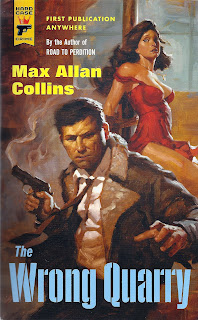 Here is another tough and gritty tale featuring Max Allan Collin’s killer-for-hire, Quarry. Collins, a superb story-teller with several series under his gunbelt, is never better then when narrating a new Quarry story.  Unlike Collin’s other good-guy heroes, the Vietnam veteran is the quintessential pragmatic character who sees his job of eliminating people as something totally mundane and unromantic.  Quarry’s philosophy is a simple one, certain people need killing and killing is something he is good at.

Upon his return from Nam, Quarry was recruited by a man known as the Broker.  Later, when the Broker betrayed him, the savvy hitman terminated the Broker and confiscated all his files.  Amongst these records were the names of the other killers working for the Broker. It was then that Quarry was struck by inspiration.  What if he were to follow these other killers, learn who their targets were and then use this information to his own advantage.  He would contact the person in the cross-hairs and, for a substantial fee, offer to eliminate the threat to them by killing the killers.  A hitman targeting other hitmen.  As bizarre as the concept was, Quarry actually made it work and was soon living a very comfortable life in his new, albeit macabre, career.

In, “The Wrong Quarry,” Quarry shadows a hitman to the sleepy little town of Stockwell, Missouri and soon learns the man’s target is a gay dance teacher named Roger Vale.  After doing a little digging, Quarry discovers that a year earlier high school senior Candy Stockwell, the granddaughter of the town’s patriarch, had vanished mysteriously.  Although the Stockwell family did its best to prove Vale responsible for the girl’s disappearance, the police could find no conclusive evidence to substantiate their claims.   Quarry learns that the majority of parents whose students were taught by Vale all supported him and believed Clarence Stockwell’s accusations were founded on his dislike of Vale’s homosexuality.

Working against a pair of killers’ unknown timetable, Quarry confronts Vale and informs him of the contract on his life.  He then offers the dance teacher his lethal services.  Once again Quarry sets about fulfilling his contract but he isn’t completely convinced it was the senior Stockwell who commissioned the hit on Vale.  As he begins to do his own private investigation into Candy’s disappearances a different picture takes shape and he soon realizes, as in all things in life, nothing is ever simply black and white.  Somewhere in the missing girl’s past is a hidden secret that hides a sadistic monster and before his job is finished, Quarry will discover the depths of depravity a twisted mind is capable of.

“The Wrong Quarry,” is another solid entry in a truly hard-edged series this reviewer hopes will never end.  These books are just too damn good!