GIDEON SMITH and the MECHANICAL GIRL 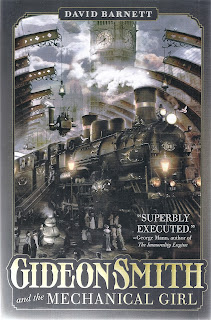 Over the past few years, the sub-genre of Steampunk has gotten quite popular to the point of becoming a separate fandom entity with gatherings and conventions dedicated to it solely; from costuming to gadgetry.  The few books we’ve read in the vein have been truly enjoyable which was why we were delighted to get this new title from good folks at Tor books.

Whereas Steampunk and New Pulp often collide, that’s never been more apparent than in David Barnett’s wonderful, “Gideon Smith and the Mechanical Girl.”  In this alternate world, Gideon Smith is the son of a fisherman living in the quaint seaside village of Sandsend, England.  Although happy, Gideon dreams of being a hero and experiencing moments of high adventure like his favorite pulp hero, Captain Lucien Trigger; Hero of the Empire.  Then one day his life is turned upside by an act of violence; his father and his crew disappear while out to sea.  When the local constable is unable to help him solved the mystery, Gideon turns to a London writer named Bram Stoker who has come to Sandsend in hopes of finding inspiration for a new book he wants to write about vampires.

All too soon, ominous events befall the small town.  A foreign sailing ship goes aground with only a dead captain tied to the wheel and a savage wild dog aboard.  Next the local constable vanishes while exploring local caves and a young boy is accosted by a bizarre humanoid frog-like mummy.  Stoker is convinced a dark evil has come ashore and he supports Gideon’s plan to go to London and solicit the aid of his hero, Captain Trigger.

Along the way, Gideon discovers a life-like mechanical girl named Maria whose inventor has also gone missing leaving her in the care of a sadistic male servant.  Gideon rescues Maria and together they make their way to the capital in hopes of finding the answers to both their mysteries.  In the end, Gideon discovers the truth behind his glorified idol and must come to grasp with the reality that magazine heroes are all too often just fiction and nothing more.  To find the answers he seeks, he will have to challenge himself beyond his boyhood dreams and tackle overwhelming obstacles along the way.

Fortunately he is not alone in his grand quest as he inadvertently gathers a colorful  group of characters willing to accompany him.  Joining Stoker and the mechanical girl are a fat, obnoxious city reporter named Bent, Elizabeth Bathory, the widow of Count Dracula, a beautiful airship pilot and a notorious Texan outlaw.  Together their adventure leads them to through the streets of London and then to the exotic dessert sands of Egypt where an ancient weapon is being assembled by a madman with one goal; to destroy the British Empire.

From beginning to end, “Gideon Smith and the Mechanical Girl,” is a pure delight any pulp fan will enjoy.  Unlike many of the convoluted, modern day thrillers we are constantly bombarded with these days, it a glorious reminder of the classic high adventure tales of such writers as H.G. Wells, Jules Verne and Robert Louis Stevenson all delivered with unabashed bravura.  Barnett knows how to tell a whopper and the world he creates in this story is one this reviewer hopes to revisit often.  It sure beats the hell of reality.
Posted by Ron Fortier at 11:29 AM