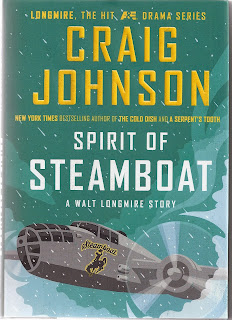 “Spirit of Steamboat” is the best story I’ve read all year.  It is easily the best Walt Longmire story I’ve ever read and could perhaps be the best single piece of fiction Craig Johnson has ever written.

Now let me back that all up.  The wonder of this little novella is how perfectly all the pieces fit together.  The plot is a gem of simplicity which then becomes the surface on which Johnson lays out some truly powerful moral tenets.

It is Christmas Eve, 1988, and newly elected Sheriff Longmire is given a challenge unlike any other he has ever faced before.  A ferocious winter storm has come barreling out of Canada and threatens to overwhelm most of the western states.   Due to the weather, a horrible highway accident has transpired leaving a very young girl the sole survivor of her family.  But she has suffered severe burns over her body and unless she can be flown to the Children’s Hospital in Denver, she will die.

Longmire is at the Durant, Wyoming airfield awaiting a Med-Evac helicopter bringing the patient and her grandmother to rendezvous with a fixed wing aircraft that will take them the rest of the way to Denver.  The problem is the storm has arrived earlier than predicted and made flying conditions impossible for any of the aircrafts housed at the airfield; all but one that is.  Set in the back of the giant hangar is an old B-25 Mitchell bomber from World War II named Steamboat after a legendary rodeo stallion by the same name.  When Longmire begins to suggest the possibilities of using the old warbird to complete their mercy flight, he’s told that not only is he crazy for suggestion such an idea but where in all of Wyoming is he going to find a qualified pilot to fly the old relic?

If you’re a fan of this series, you already know that Longmire’s predecessor, and mentor, is a cantankerous, one-legged old cowboy named Lucian Connally.  As it turns out, the former sheriff was a bomber pilot in the war who flew in General Jimmy Doolittle’s raid against Tokyo within weeks of American’s entry into the conflict.  Longmire manages to locate Connally and “recruit” him for the mission.  Connally in turn drafts the lovely Julie Luehrman, a local school teacher and pilot to be his co-pilot as he argues he’ll need someone with “two” legs to help him control big plane.

When the medical helicopter arrives with its precious cargo, Longmire is given another set-back.  Neither of the medics is willing to accompany them on the dangerous flight to Colorado aboard the vintage bomber.  They consider the flight impossible and neither is willing to risk their lives. And therein lies the moral center of this fable; just how valuable is any single life?  Is it really worth endangering many to save one?  For Walt Longmire, there is no complexity to that question whatsoever.  He knows the right thing to do regardless of the odds against them.  In the end, it is his good friend, Doctor Bloomfield who volunteers to go along and watch over their patient replacing the cowardly medics.

Once the Steamboat takes off into the whirling, white maelstrom, the story accelerates into a nail-biting adventure as these four good people dare to battle a raging blizzard to save the life of a little girl.  Flying on a wing and a prayer, finding courage deep within themselves, the crew of the Steamboat perform selflessly thus demonstrating by their actions all that is good and noble in humanity.

By the book’s poetic finale, I was emotionally wrung out.  “Spirit of Steamboat” is a book I plan on giving to friends as a Christmas gift this year.  It is a reading experience I want to share with them…and you.  But before that, I want to say to Craig Johnson, “Thank, you.”
Posted by Ron Fortier at 1:54 PM