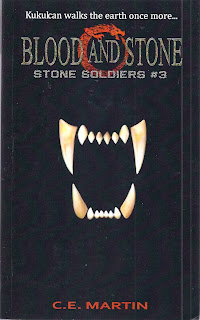 No writer in the New Pulp movement writes more intense, all out battle action sequences than C.E. Martin.  His Stone Soldiers series, of which this is the third, is a unique blend of superhero dramatics blended with Tom Clancy style military encounters.  “Blood and Stone” wraps up the first story arc began with volume one, “Mythical,” as Colonel Mark Kenslir and his super soldiers of stone from Detachment 1039 confront the ancient monster-god Tezcahtlip in the heart of the Yucatan jungles.  It is there the ancient shape-shifter has set up his new empire posing as the Mayan deity Kukulcan.

Throughout this series, beside his hyper-pulp pacing, Martin has created some truly memorable characters to populate his over-the-top saga.  With “Blood and Stone,” he adds yet another remarkable player in Dr. Laura Olson, Kenslir’s vampire ally, who joins his team in leading the hunt for Tezcahtlip because in their first encounter, the beast ripped out her heart and ate it.  Sound outrageous?  You bet it is and becomes a pure adrenalin rush from cover to cover.

Our single nagging critique is that sometimes Martin gets caught up in his own gory excessiveness and it becomes repetitious.  The goal of all good writing is that every single sentence, paragraph and chapter is vital to the narrative.  Towards the middle of this adventure, we were stopped short by a chapter which, aside from displaying the villain’s inhuman cruelty, adds nothing new to the plot.  Because we were already well aware of the monster’s character, this entire chapter was pointless.  Martin would do well to enlist an experienced editor to help him recognize these excesses and help him avoid them in the future.

That being said, “Blood and Stone” is a terrific third volume in a very original concept and one this reviewer is eager to see expanded to other storylines.