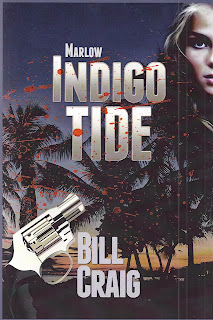 Rick Marlow was a New York City cop with a promising career of ahead of him.  One night, while answering a call about a body found in an alley, he was shot in the back by his own partner, Nolan, and left for dead.  He later discovers, after surviving multiple surgeries, that his pal had taken his own life after shooting Marlow; all because Nolan was a dirty copy and Internal Affairs was on to his sins.  Unfortunately for Marlow, the detectives of I.A. come to the conclusion that he too was crooked by association and began an harassment campaign hoping they could intimidate him into confessing his wrong doings.

Despite the fact there was absolutely no evidence against him, Marlow knew the investigators wouldn’t relent and thus he had no other option than to quite the force and seek employment elsewhere.  Who ever said life was fair?

Marlow decided it was also time for a change of scenery.  At one time his deceased father had worked as a private investigator for a lawyer named Walter Loomis now practicing in Key West, Florida.  Taking what little he owned, Marlow headed south to find Loomis and offer to work for him in the same capacity as his father had once done.  Loomis, familiar with the young man’s plight and inexcusable treatment at the hands of the NYPD, accepts his offer and gives him a job.  A smart man, Loomis had been close to Marlow’s father and is willing to take a chance that Marlow is cut from the same cloth as his old friend.

Marlow’s first assignment is to find a young woman who has come into a sizeable inheritance from the death of her two grandfathers.  The girl had dropped out of sight months earlier and the executor of the estate wants her found to settle things.  Taking what little data provided by Loomis’ client, Marlow eagerly begins his hunt.  But what starts as a simple missing persons case soon escalates into something a whole lot deadlier and Marlow is suddenly crossing paths with one of Miami’s most powerful tycoons, dodging bullets, confronting outlaw bikers, and coming under the surveillance of the Cuban secret police.  What is it about this young woman that ignites such a storm of violence and why are very bad people doing their best to make sure Marlow doesn’t find her…alive?

Bill Craig is no stranger to well plotted, private eye capers, having created the Sam Decker series a few years ago much to acclaim of mystery fans.  With Rick Marlow he has another winner in envisioning a believable, world weary character with just enough honor to fight the good fight, protect the innocent and take on the bad guys even when the odds are stacked against him.  Marlow’s pedigree clearly harkens back to Sam Spade all the way to Jim Rockford and Craig never misses a beat.  This is familiar territory that never gets old when handled by a writer of his caliber.  Pick it up; the adventure is just beginning.
Posted by Ron Fortier at 10:56 AM