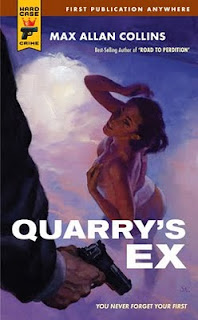 Paying homage to the potboilers of the 40s and 50s, Collins laces his tale with the most outrageous sexual encounters; all done with a sly, sharp wit that is ingratiating. At the same time he balances that adult humor with explosive violence that is as mesmerizing as it is ugly. His prose falls into place with the deft touch of a contemporary poet, each line awakening a new possibility in how we see the world. Reading Quarry is an education in human psychology taught from the barrel of a silenced automatic.
Posted by Ron Fortier at 5:36 PM

I agree that each HCC Quarry book has been more compelling than the last. They are among my favorites in the HCC line. Look forward to Quarry's ex - thanks for review/preview.

My pleasure, P.M. As a Quarry fan, you are going to really enjoy this new book.