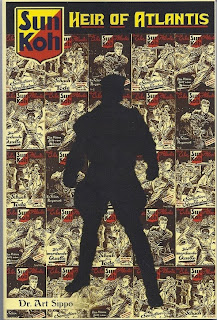 Dedicated pulp fans are aware of the fact that the concept of hero pulps was not limited to the United States. During the 30s and 40s, pulp magazines were popular all over the world and there were hundreds of original crime fighting heroes created in England, France and Germany. One such foreign star was Sun-Koh, Heir of Atlantis written by German writer Paul Muller and clearly intended to be an Aryan version of America’s Doc Savage. Like Savage he was larger than life and throughout his hundreds of adventurers was accompanied by a group of loyal, unique individuals.

Beside the similarities there were also major differences and these were what have created an on-going controversy over this character. Whereas Doc Savage was a man of science and his companions all experts in various technical fields, Sun-Koh was slanted towards mythology and magic. He was supposedly a time-traveler from the sunken continent of Atlantis, a member of the royal family and master of mystic abilities. And although there was plenty of super scientific gizmos in his adventures, it was the magic that took center stage. His aides were also magicians, immortals and religious Hindu assassins. Quite an eclectic mix.

Still the biggest divergent was Sun-Koh’s political philosophy. It reflects the superman philosophy of Friedrich Nietzsche. Muller easily adapted it into his character, a near perfect specimen of man. Yet these stories were being written at the same time Adolf Hitler and his Socialist Democratic Party were manipulating the philosophy to suit their own claims that pure blood Aryan supremacy was destined to rule the world. Initially the pulp writer and the new German administration were raising the same platform but in the end, unable to make allowances for anything they did not consider intellectual superiority, the Nazis shut down the flamboyant pulps for being cheap entertainment. Thus ended Sun-Koh’s adventures.

Today’s pulp fan have a natural disdain for the Sun-Kon tales and it is to Dr.Sippo’s credit that he chose to bring this volatile character back in this new collection. Sippo believes there were real ideological differences between Muller’s creation and Hitler’s Aryan propaganda and this is what he explores further in his own original adventures. SUN KOH-HEIR OF ATLANTIS features five of Sippo's original Sun-Koh tales, the first three had been published previously and set up the series and introduce this marvelous cast and the last two are brand new, continuing the adventures. The transfer is seamless and I was very impressed in how Sippo captured the over-the-top plotting of classic pulp writing. There is nothing small in these adventures, from invisible super planes run on cold fusion, to super-powered armored warriors battling each other like the knights of old.

There’s also a very large dose of violent Tantric sex thrown in which is brutal and savage and not for the timid. This is adult fare and although not lascivious in any way, the reader should be wary that these tales are not sanitized for some PG rating. In the end, this is a truly remarkable book and one no true pulp fan should pass up. Sun-Koh remains one of pulp history’s most remarkable figures and now, thanks to Dr.Sippo and Age of Adventure, all of us are discovering him for the very first time.
Posted by Ron Fortier at 8:16 AM

NONE of the stories in this collection are by Muller. ALL are by Art Sippo.

The first 3 stories are Art's 'origin story' for Sun Koh, which saw print in several prior publications. The 4 & 5 stories are new to this collection.

Thanks, so much, emb021, I have revised the review and sent Art my sincerest apologies. This is truly an awesome collection.

Where does one find this book?

(http://stores.lulu.com/goldenage1)
The link above will take you to the Age of Adventure on-line store, Rick,where you can order SUN-KOH Heir of Atlantis. The book is very reasonably priced.

I heard Art Sippo recently on The Book Cave and this sounded really interesting. It's always fascinating to see the world of Nazi Germany in the days before many of their most brutal policies came into action and I'm curious how Sippo handles it.