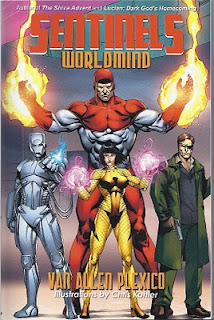 Still, if you truly love wild space action, terrific characters and nail biting suspense, you must read these books. They are like nothing in heroic fiction ever done before. And let me add this incentive. Like all true talented writers, Plexico’s storytelling skills get better and better with each new book so that by the time you reach WORLDMIND, you are in for a tremendous, satisfying experience. THE SENTINELS is a truly wonderful homage to the comics we all grew up and should not be missed.
Posted by Ron Fortier at 8:00 AM

Josh Reynolds said...
This comment has been removed by the author.
10:07 AM

I do love me some Van Allen Plexico. Man does great super-hero action. Love his writing so much, in fact, my first comment got all screwed up.

Hahaha, I do this kind of stuff all the time, Josh. Anyways, you are right all the way. Nobody writes this kind of fiction better than Van.