THE TERROR OF FU MANCHU 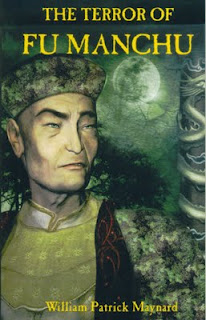 
One of the most popular pulp villains of all time was Sax Rohmer’s Chinese mastermind, Dr. Fu Manchu. Rohmer was the penname of Arthur Henry Sarsfield Ward, a prolific British novelist born in 1883 and died in 1959. Rohmer’s first introduced the character in The Mysterious Dr. Fu Manchu, which ran as a magazine serial between 1912-13. It was an immediate success with its fast paced action centered on Sir Denis Nayland Smith and his companion, Dr. Petrie, taking on the world wide conspiracy of the “Yellow Peril.” The character went on to be featured in motion pictures and television with such notable actors as Warner Oland, Boris Karloff and Christopher Lee in the menacing role.

Now for the first time in many, many years we have a brand new, authorized adventure by William Patrick Maynard and it is a gem. Maynard’s style perfectly captures the voice of Dr.Petrie, the stiff-lipped hero/chronicler who battles valiantly alongside his courageous boyhood pal, Nayland Smith. Maynard has clearly done his homework and he peppers the narrative with many references to the duo’s past sorties against the fiendish leader of the Si Fan, the Chinese secret society devoted to world domination and the destruction of the British Empire.

This particular case revolves around a retired cleric whose autobiography contains the whereabouts of a precious, long lost ancient artifact said to contain powers that could destroy all of mankind. As Smith and Petrie take up the hunt, they quickly find themselves not only battling Fu Manchu and his Si Fan, but a second mysterious organization, one steeped in the occult and devil worship. Amidst this contest between two equally deadly groups, our heroes must win out or the civilization is doomed. From London to Paris, the action moves at a breakneck pace with a marvelous collection of truly memorable characters, both good and evil.

I particularly liked how deftly Fu Manchu was described, Maynard opting to give the figure a subtle, devious villainy and not turn him into a cardboard stereotype. In doing so he has delivered one of the finest pulp novels of the year and a worthy addition to the canon of Sax Rohmer’s thrilling saga. If you’ve never read a Fu Manchu tale, this is a terrific place to get started. This is pulp at its best.
Posted by Ron Fortier at 7:47 AM

I remember my Dad reading me Fu Manchu stories when I was a kid. I loved them and love the whole detective-pulp novel genre. Just found your site today while surfing. Good work. I will bookmark you.

Thanks, Sandy. Hope you do drop by often. You'll find I have a very varied taste in literature.