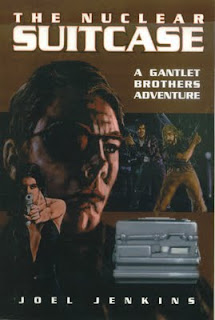 The year is 1987 and the world is grappling with the economic collapse of the Soviet Union and end of Russian Communism . Fritz, Sly, Matthias, Mitz and Otto are the Gantlet brothers, a family rock group with a rather dramatic past. Born in East Germany, the five boldly escaped over the Berlin Wall to freedom years earlier. In the process, they acquired certain skills which, once relocated to the United States, they found commercially beneficial to their survival. To fund their music career, the brothers hire themselves out as bodyguard/security experts. This in turn leads to them into various adventures conducted in the shadowy alleyways of global espionage.

As this story beings, we learn that a disgruntled former KGB general is determined to see the Hammer & Sickle returned to its former glory. To achieve this end, he and his fanatical followers, hatch a plot to smuggle three nuclear bombs into the U.S. in small, harmless looking suitcases. It is only by chance that Sly and Fritz Gantlet discover the plot and are soon working hand in hand with the C.I.A. to find the three deadly containers and disarm them before the mad Russian can start World War III.

From the Agean Ocean to London, New York, Seattle and San Francisco’s Chinatown, the brothers find themselves propelled into a tense race against time, with only their wits and reckless courage to see them through. And as if three nuclear suitcases weren’t enough to deal with, a former German adversary turned mercenary appears with his own personal vendetta to settle against the brothers. And then there’s the beautiful female rock star who Sly finds himself enamored with. But is she one of the good guys or a double agent sent to destroy them?

Jenkins is a capable storyteller who is clearly having fun with this old fashion thriller. He has created a marvelous cast of characters unlike any others we’ve encountered in action fiction before and the sibling dynamics is a truly fresh approach to the genre. This is clearly modern pulp and worth your attention and support. Here’s hoping we haven’t seen the last of the Gantlet Brothers.
Posted by Ron Fortier at 8:04 AM

I'm familiar with Joel but haven't read this yet. The plot sounds pretty cool -- in fact, it sounds like it'd make an awesome movie.

That it would, Barry. Underlying feeling I had while reading it was, "Gee, what if James Bond had not been an only child?" I'd imagine he and his brothers would have been very much like the Gantlets.