QUARRY IN THE MIDDLE 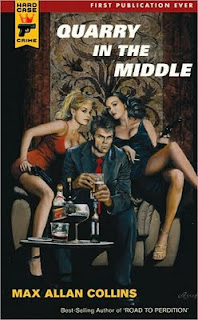 First up let’s have no misunderstandings here, the release of a new Quarry novel is always cause for celebration amongst mystery and crime readers. Max Allan Collins’s prose is lean and mean in the best pulp sense. So a few chapters into this one, I suddenly find myself chuckling, “Shades of Yojimbo!!”

Back in 1961, Japanese director Akira Kurosawa dropped the film world on its derrier with an outlandish period drama called Yojimbo. In the movie a masterless samurai, played by Toshiro Mifune, arrives in a small town where competing crime lords make their money from gambling. He convinces each crime lord to hire him as protection from the other. By the time this conniving swordsman is done, he’s manipulated both gangs in wiping each other. He then cleans up the remnants with his lightning fast sword.

The film was such a huge international hti. Kurosawa said in later interviews that he was inspired by the American film noir classic, The Glass Key, based on a story by Dashiel Hammett’s 1931 novel. It is obvious there is something about this particular plot that fires the imagination of both writers and artist because, after seeing Yojimbo, in 1964 Italian director Sergio Leone remade it as the western A Fist Full of Dollars, starring Clint Eastwood and then in 1996, director Walter Hill took his shot, filming it as The Last Man Standing. This time it’s a Depression Era gangster theme, almost bringing it full circle with Hammett’s original tale.

And now we have QUARRY IN THE MIDDLE, the title itself being a tip off that we are about to revisit this classic plot, but in a very fresh and nasty way. Quarry, the enigmatic hero of the book finds himself in the river town of Hadee’s Port, having trailed another assassin there. In previous books, Quarry had stopped working for others and become an independent contractor. Once in the little burg, he quickly learns it is a wide open gambling town run by two gangs with strong connections to the Chicago mob, each annoyed by the other and each trying to get the upper hand.

Quarry waste no time in playing both sides against the middle, at the same dealing with the hired gun. He maneuvers himself into a position of trust with the expatriate Brit, Richard Cornell, running the high class casino. Once Quarry proves to Cornell that someone on the other side is trying to take him down, Cornell waste no time hiring him to discover who has put out a contract on him and then take them out. It’s a dangerous cat and mouse game, particularly when there are a lot of the felines and only one rodent. Bodies start to fall like dominos and eventually Quarry’s impromptu game of cards falls apart leaving him exposed, beaten to an inch of his life and about to buy the dirt farm of eternity.

This book, like all Quarry tales, is as addictive as a jar of salted nuts. Once you’ve eaten one, you know damn well the entire bowl is going to get emptied before you’re done. So pour yourself a tall cold one, grab that bag of nuts and kick your shoes off. QUARRY IN THE MIDDLE is an audacious ride over familiar territory, but delivered in a knee-to-the-groin kick that is just too damn much fun. Nobody does it better than Collins!
Posted by Ron Fortier at 11:50 AM

I loved For a Fistful of Dollars with Eastwood and wasn't Last Man Standing with Bruce Willis?

Definitely a great theme, so I got to check out this book. The Hard Case Crime series is always enjoyable. Reminds me of the Golden Age Stories.