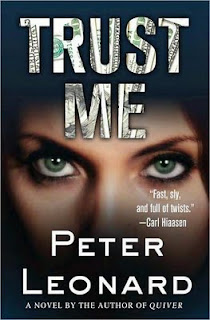 If you are an avid reader, then you are well aware of writer Elmore Leonard and his rise from an obscure pulp writer in the 40s and 50s to one of the country’s bestselling crime novelist. Although in those early years, Leonard was quite successful as a western writer, it was his shift to oddball crime stories that cemented his popularity among critics and readers alike. Of course it didn’t hurt that brash, innovative filmmakers like Quentin Tarantino adapted Leonard’s work to the movies as well.

Now I bring this all up to introduce this, the second novel by Elmore’s son, Peter Leonard. According to the book’s front and back cover blurbs, this is his second book and the first, called QUIVER, seems to have elicited much critical praise. Having not read that book, I can’t opine one way or the other. Rather it is TRUST ME that has now introduced me to Peter Leonard and I have mixed feelings about it.

No surprise that he would write a twisted, noir crime tale in the same vein as his father. This acorn has really not fallen very far from the tree, I only wish it was much more grounded like the originating timber. Karen Delaney is a beautiful, Detroit based model, who has been ripped off by her former boyfriend, a thuggish Chaldean immigrant named Samir. She foolishly hands him $300,000 to invest for her. When they break up, after he physically abuses her, she finds herself unable to get the money back. Desperate, Karen decides to hire local thugs to steal the money back. Of course once she sets this scheme into motion, it quickly goes awry. Within twenty four hours of the theft, two people are dead and Karen is running for her life with an eclectic bunch of hoods on her tail to include two Iraqi veterans of Saddam’s Royal Guard and an ex-Detroit cop name O’Clair, who is one tough dude.

Half way through the book, I found myself both enjoying and being annoyed by it. The story’s premise is fine and the action moves at a really fast pace. All too the good, but lost in the process is any real characterization, save for the two principle characters, Karen and O’Clair, everyone else seems totally one-dimensional and sometimes hard to tell apart. Then the writer starts playing footloose with the narrative’s time, much like those Tarantino movies I mentioned earlier. Which definitely did not work here and really stopped the flow of story like an unexpected detour roadblock. An example, in one scene a character is brutally murdered and dumped in a hotel closet, then in the very next scene appears at Karen’s door, very much alive. Huh? It took this reader a few minutes to realize Leonard had gone back in time for the second scene.

Sorry, but what works on the big silver screen was never intended for the pages of a book. That’s the lesson he needs to learn. If he wants to write screenplays, I say go for it, but books don’t work this way. In the end, TRUST ME, is a freshmen work by a writer with a lot of talent. Here’s hoping future efforts will improve and not repeat these early miscues.
Posted by Ron Fortier at 9:43 AM